Snowy owls are coming down to Minnesota earlier and more often 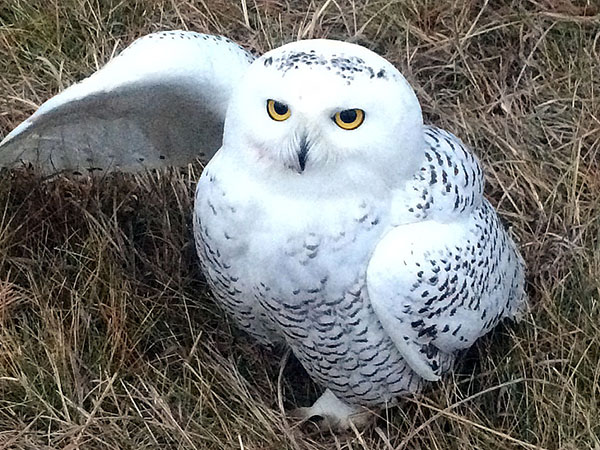 Mindy Kleeb found an injured snowy owl on the road near Pinewood on Tuesday. – Photo courtesy of Mindy Kleeb

Mindy Kleeb was driving to work earlier this week near Pinewood when she saw a snowy owl standing by the side of Highway 5 like a hitchhiker.

“I could tell his wing was hurt,” she said. “So I called the DNR and told them right where he was.”

Snowy owls are not native to Minnesota but fly down from the Arctic Circle when they run out of food. They used to appear in predictable cycles every four or five years — cycles that are starting earlier and happening more often.

By noon, Kleeb said the Minnesota Department of Natural Resources told her they couldn’t find the bird, so she went back on her own and found it 40 yards back from the road. She figured the bird would be killed by predators by morning.

So, she wrapped the owl in her coat and brought it to the DNR office 30 miles away.

“Its eyes were just as yellow as they could be,” she said, “It was just beautiful, but I’m fairly sure it peed in my jacket.”

Kleeb said the owl rode calmly on her lap, “kind of like a dog sits,” but that’s not normal. Christine Herwig, a DNR nongame wildlife specialist working in Bemidji, said even injured owls have strong talons, and people should stay away to avoid getting hurt.

Herwig said dozens of snowy owls have been sighted in northern Minnesota in the last week. Three were reported in Bemidji alone and she expects many more to arrive through the middle of November.

Snowy owls eat a lot of lemmings, a rodent that lives on the arctic tundra. When there are plenty to be had, the owls breed quickly. When the lemmings run out, owls fly south looking for food.

“It’s a boom and bust cycle,” Herwig said. “Sometimes there’s too much competition up north.”

She said the cyclical appearance of snowy owls in northern Minnesota is accelerating. Snowy owls have been hungry enough to fly south three out of the last five years.

This year researchers expected to see fewer snowy owls in the lower 48 but they’re back, according to Alexis Campbell.

Campbell is a spokesperson for Project Snowstorm, a nationwide snowy owl research program based out of the Ned Smith Center for Nature and Art in Millersburg, Pennsylvania. She said snowy owls are arriving in force all across the country.

“There was a massive explosion in lemming numbers a few years ago,” she said, explaining the ecosystem has yet to level out.

Campbell said researchers are enjoying an opportunity to get close to a creature that’s usually hidden away beyond the Arctic Circle.

Kleeb’s snowy owl was passed along to the University of Minnesota Raptor Center where he’ll get care for his injured wing.

Tips for dealing with snowy owls

The DNR’s Christine Herwig has some advice for dealing with snowy owls:

To spot a snowy owl in Minnesota, head to an open area like the fringes of an airport or long stretches of highway. Snowy owls hunt large areas by sight.

Don’t feed the owls. They won’t get the right nutrients from human food.

Keep your distance from owls. They have large claws and exceptionally strong beaks. If they’re flying south they’re probably hungry and stressed. Not all snowy owls will ride patiently in cars.