State may be close to allowing pot prescriptions for pain relief 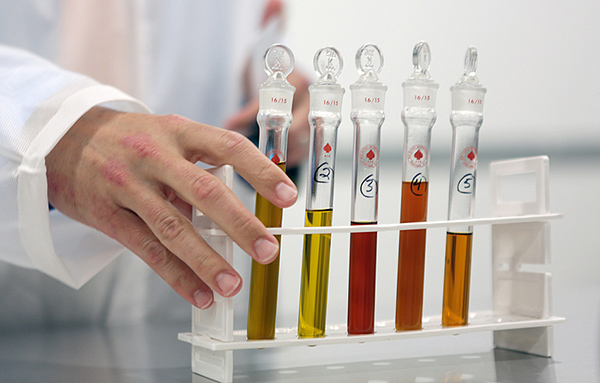 Pictured are test tubes of terpenes at LeafLine Labs in Cottage Grove. Terpenes are the oils that produce the various aromas of medicinal cannabis. – Jeffrey Thompson/MPR News file

For Nikki Villavicencio of Maplewood, just getting out of bed in the morning can be extremely painful.

Villavicencio, 31, has suffered all her life from arthrogryposis, a condition that makes every joint in her body stiff and difficult to move.

“I also have a secondary condition of arthritis, which is in most of my joints,” she said. “I have arthritis in my hips and my knees and my ankles and even a few of my toes.”

Villavicencio, who uses a powered wheelchair to get around, said that in spite of the pain, she has a busy life as an advocate for people with disabilities, as a Maplewood parks commissioner and a mother.

She said she’s tried various pain medications over the years but couldn’t deal with the side effects. The only thing that works, she said, is marijuana.

“I can literally take a puff, or whatever you want to call it, and feel better within 15 minutes and continue my activities,” she said.

Even though Minnesota lawmakers approved non-smokable forms of medical marijuana last year, Villavicencio can’t get it because she does not have any of the nine qualifying conditions listed in the law.

Minnesota Health Commissioner Ed Ehlinger must decide by year’s end whether to add severe, incurable pain to the list of qualifying conditions for medical marijuana. A state advisory panel recommended last week against such a move, saying there’s too little medical research on pot as a pain treatment.

Ehlinger will attend a public input session Tuesday in West St. Paul, where he’s expected to hear from many advocates of medical cannabis who say it’s their only hope of relief.

Of the 23 states that allow medical cannabis, only Minnesota and four others do not allow it as a pain treatment. State Sen. Scott Dibble said that was the result of a compromise with law enforcement groups, which feared some people would game the system.

The Minneapolis DFLer said the law does allow the state health commissioner to add “intractable pain” to the list of qualifying conditions. And Dibble is urging Commissioner Ehlinger to do so.

“People are suffering, and they might have access to something that can help them, and to create bureaucratic barriers makes no sense to me at all,” Dibble said.

Last week, the Health Department said 417 people had sent in written comments on the proposal. Of those, 388 favored putting pain on the list of qualifying conditions.

But a state advisory panel is recommending against allowing patients be qualified just for pain — at least for now.

Daniel Truax, a physician’s assistant at a St. Cloud pain clinic and one of eight medical professionals on the panel, said he initially favored including pain as a qualifying condition but later changed his mind.

“There really wasn’t a lot of great, compelling evidence that it really was helpful,” he said.

But like his colleagues on the panel, Truax acknowledged that marijuana’s illegal status hampers medical cannabis research. He said the federal government needs to remove marijuana from the list of Schedule 1 controlled substances — meaning those with no currently accepted medical use — so research can proceed.

Adding intractable pain as a qualifying condition would likely give Minnesota’s fledgling medical marijuana industry a much-needed boost. Initial expectations when legislators passed the law were that 5,000 people would qualify. But as of Friday, the state Health Department had approved fewer than 700 patients for the cannabis registry.

The public meeting is scheduled from 3 to 6 p.m. Tuesday at Wentworth Library in West St. Paul.