A 12-hour challenge for a good cause 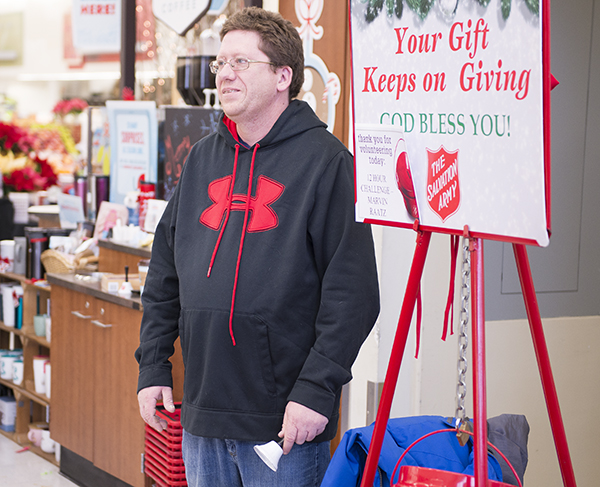 An Albert Lea man volunteered his Friday by spending 12 hours without rest to raise money for the Salvation Army Red Kettle Campaign.

Marvin Raatz, 41, took the day off from his job as janitor at the Salvation Army to ring a bell at Hy-Vee. Raatz said ringing a bell was nothing compared to the suffering of the less fortunate.

“To me, I have things a lot of people don’t have,” Raatz said. 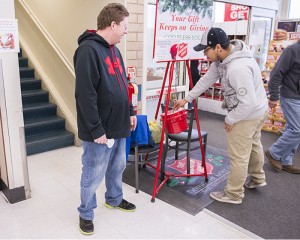 Raatz said his goal was to raise $1,000 during the challenge Friday. — Colleen Harrison/Albert Lea Tribune

He competed in the 12-hour challenge against three other ringers from the Salvation Army of Marshalltown, Iowa.

Raatz said he raised $1,733 in the 12-hour span, and the other three ringers raised a combined $833. None of the ringers in Marshalltown lasted the entire 12 hours.

The challenge was looked at as a way to see who could raise the most money during the time span, Raatz said.

“I’ve always had a Christian belief,” he said. “We’ve had parts of our lives where we’ve suffered as well.”

His daughter, Kaitlyn, has had medical issues throughout her life and has been in and out of hospitals.

Raatz said his experiences have led him to serve.

“You end up finding out that material things aren’t the most important thing, that helping each other out any way you can is,” he said.

Raatz picks up collection kettles at the end of the day to bring back to the Salvation Army corps building and is a volunteer on the emergency disaster relief team for the Salvation Army that assists in the aftermath of disaster.

He said the need to support the less fortunate through food, clothing and other donations exists throughout the year.

Raatz and his wife, Suzy, also have a son, Cody, who is a student at Riverland Community College.

Maj. Elsie Cline of the Albert Lea Salvation Army said donations for the campaign are a little behind schedule this year.

“It’s a little slow, but we feel it’s going to start picking up,” Cline said.

She expects half of the donations for the campaign will come Saturday from “Double Your Donation.”

As of Dec. 7, the organization raised $34,000 from its red and counter kettle campaign.

Cline said the weather is having an impact on donations, and the donations are critical.

“It’s giving to others,” she said. “Our motto is doing the most good, and there are others that really need to have a special Christmas.”

She said 400 families will receive Christmas dinners from the Salvation Army, and 718 children will receive toys.

She didn’t have definitive figures about how much has been raised through mail appeals and in-house donations.