Anything and everything about squirrel nesting habits in the winter 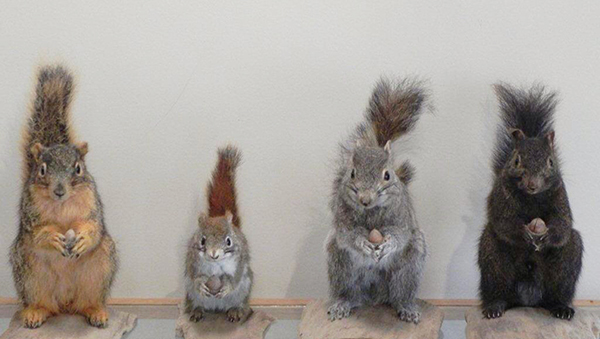 There are many varieties of squirrels including the fox squirrel, red squirrel and gray squirrels. – Al Batt/Albert Lea Tribune

“Everything is nearly copacetic. I’m still a mouth to feed. Pop hates it when I give him a Christmas/birthday combo gift, but that’s what he gets for being born in May. He had an artificial knee put in this year and a hip replaced two years ago. Ma says he isn’t the man she married. I think the world has gone mad, but I believe there is greatness in every person unless he has just eaten the special at the Eat Around It Cafe. I think often of something that I could do to make the world a better place, but before I can do anything about it, it’s time to eat dinner. I eat and forget what I was going to do. I become a hound that had lost the scent. Christmas is truly a time of miracles. I learned that when I was a boy. Do you know what you get when you grab the top of a decorated Christmas tree and bend it over as far as it goes and then let go of it?”

“You don’t get as many presents as you expected.”

The light snow that had fallen on the deck had been crosshatched with the footprints of songbirds.

A bit of the macabre presented itself. Crows fed on a deer head in the middle of a gravel road. The head was likely dragged there by a dog or coyote.

I took part in the Christmas Bird Count in Mankato. At Calvary Cemetery, two friends and I encountered several hundred cedar waxwings feeding on the abundant berries of the cedar trees. The birds are aptly named.

Each CBC brings something so magnificent that words fail to do it justice.

“How do squirrels put their leaf nests together so that they don’t fall apart?” Once leaves have fallen, squirrel nests or dreys are easy to see, often in an oak providing acorns or near a grapevine offering support. Location is important and a leafy nest can be built near a tree trunk, between limbs, in the crotch of a tree or on a strong limb at least 20 feet above ground. Built in summer or early fall, the drey begins as a collection of small, chewed-off branches bearing green leaves that are woven together. Even though they have browned by winter, the leaves continue to cling tightly to their branches because they were harvested before the tree began dropping its leaves. The branches are loosely woven into a hollow sphere, the inner surface of which is lined with a variety of materials, including grass, leaves, moss, pine needles and shredded bark. The outer layer of leaves sheds rain and provides protection from wind while the lining insulates against cold. The entrance hole faces the tree trunk. Dreys that appear flat or incomplete are either the remains of summer sleeping platforms or the efforts of young squirrels. Squirrels usually build a couple of dreys, allowing an option should one nest be disturbed by a predator or lice and fleas. Hollow trees are the preferred nest sites for raising young.

“You mentioned on your radio show that women’s hats were once made of not only feathers, but of birds. How prevalent was that?” During two walks on Manhattan’s streets in 1886, Frank Chapman, the American Museum of Natural History’s ornithologist, identified 40 native species of birds including sparrows, warblers and woodpeckers that had been killed, stuffed, and attached to over 500 of the 700 women’s hats he saw.

“Could I have seen an Oregon junco in Minnesota?” It’s possible. Among the 15 described races of the dark-eyed junco, six forms are easily recognizable and five were considered separate species until the 1980s. There are two widespread forms of the dark-eyed Junco–the slate-colored junco of the eastern United States and most of Canada, which is gray above and the Oregon junco, found across much of the western U.S., which has a dark hood, brown back and rufous flanks. The two interbreed, so identification can be tricky because of the hybrids.

“What are the most common names for a lake in Minnesota?” According to the DNR, the top 10 in descending order are: Mud, Long, Rice, Bass, Round, Horseshoe, Twin, Island, Johnson and Spring.

They are most often seen at feeders at dawn and dusk.

“If at first you don’t succeed, failure may be your style.” — Quentin Crisp

“One of the most glorious messes in the world is the mess created in the living room on Christmas day. Don’t clean it up too quickly.” — Andy Rooney