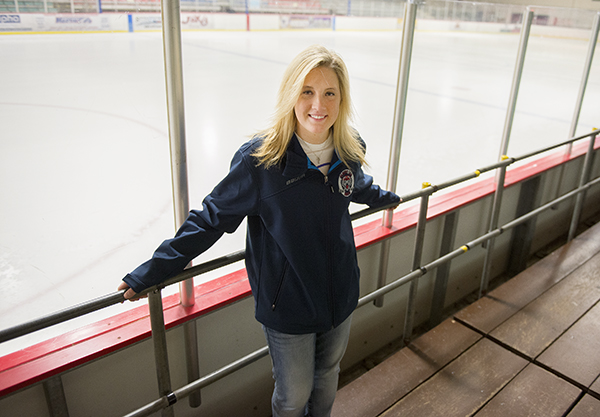 Hockey is a way of life for one Albert Lea native.

Sarah Jensen, 27, is in her first year as an assistant coach for the Albert Lea High School girls’ hockey team. Jensen herself played for the Tigers from seventh grade through her senior year. She played as a forward up until 10th grade, when she was switched over to defense.

Jensen first started to play hockey when she was in third grade. She said she had tried figure skating but didn’t like it, so when her brother showed an interest in playing hockey she followed suit.

After graduating high school in 2007, Jensen enrolled at South Dakota State University in Brookings, South Dakota, and played club hockey there for four more years. She graduated from SDSU in 2011 with a degree in consumer affairs and an emphasis in financial planning.

In 2010, before her senior year of college, Jensen tried out for a team that the United States was going to send to the World University Games in Turkey. She traveled to Kalamazoo, Michigan, for tryouts and was given an alternate spot on Team USA. She eventually was needed because of an injury when the team went to Turkey in February 2011. Jensen was one of two non-Division I players to make the team, and she scored a wrap-around goal against Great Britain. While playing overseas, Jensen said the team defeated Great Britain and Turkey, before losing to Canada and losing the bronze medal game against Slovakia.

After graduating from SDSU, Jensen had an internship with the Ed Snyder Youth Hockey Foundation in Philadelphia. The foundation, which is run by Philadelphia Flyers owner Ed Snyder, helps underprivileged children get into the game of hockey.

Jensen moved to Los Angeles in 2013 for a job as part of the chariot staff in fan development for the Los Angeles Kings of the National Hockey League. Her duties included conducting interactive activities before and after games at the Staples Center, including blow-up puck shooting games and street hockey.

After moving back to Albert Lea in June 2014, Jensen is now a production supervisor at Hormel in Austin. Albert Lea girls’ hockey head coach Jason Fornwald, who coached Jensen for a year or two when she played for the Tigers, approached her about being one of his assistant coaches this season. She said her only hesitation was how her work schedule would factor in, as she works overnight most shifts, but that she ultimately wanted to help coach the team. Jensen said she has had some long nights and days when the girls have played further away games, but that the experience has made up for any long hours.

Jensen currently plays in two women’s hockey leagues — one based out of the Twin Cities and another that’s based out of California. The one out of the Cities plays most weekends, and the team in California plays in tournaments a few times a year. Jensen will play with the California league next in January in Las Vegas.

Continuing to play after graduation is something Jensen encouraged to other players nearing the end of their high school or college careers.

“If you can enjoy it when you’re out of high school, do it,” she said. “Give it your all, every single day. … It could take you wherever you want to go.”