Berdine Gayle Drager, 95, of Wells died Monday, Dec. 21, 2015, at New Richland Care Center in New Richland. A funeral service will be at 2 p.m. Wednesday at United Methodist Church in Wells. The Rev. Paul Woolverton will officiate. Visitation will be one hour prior to the service at the church. Interment will be at Rosehill Cemetery. Bruss-Heitner Funeral Home of Wells is in charge of arrangements. Visit www.brussheitner.com to leave online condolences. 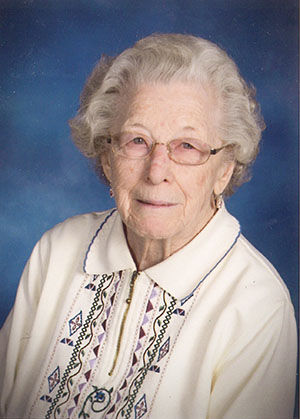 Berdine was born Aug. 28, 1920, in Trimont, the daughter of Louis and Martha (Mischke) Gimberline. She graduated from Freeborn High School in 1940 and married Wilbert Drager onJuly 3, 1944, in Dunbar Township in Faribault County. She worked for many years at Banquet Foods in Wells. Berdine loved her cats and spending time with her family. She especially treasured the time she spent with her two granddaughters. She was an active and faithful member of United Methodist Church in Wells, where she was involved with United Methodist Women and Awesome Adults.

Berdine is survived her granddaughters Renae Hagen of Wells and Cindy Hagen of Mankato; son-in-law, Thomas Hagen of Wells; sister-in-law, Toni Gimberline of Wells; and nieces, nephews and their families.