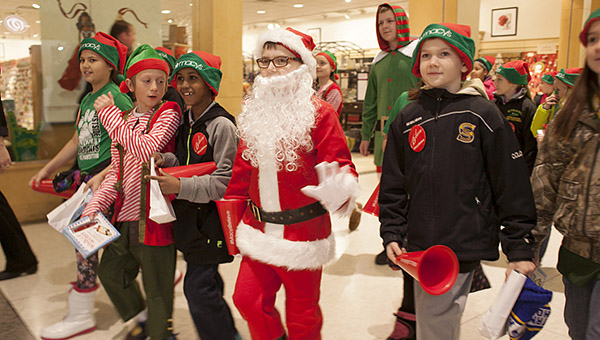 The spirit of Santa Claus is alive and well in the Red River Valley. Just ask Keaton Nelson of West Fargo, North Dakota.

Nelson — with friends and family in tow — started the morning with a surprise makeover at Macy’s department store in Fargo. When Nelson learned he would spend the day as Kris Kringle, he pumped his fist in the air and shouted an enthusiastic “Yes!”

A beard and a pint-sized Santa suit — embellished by a local tailor — helped Nelson get into character. “Now, this tickles my nose,” Nelson remarked about the beard.

Another Santa had made a lasting impression on Nelson a few years earlier.

“Once when I was sick in the hospital, he came to my room and he gave me toys,” said Nelson, who has battled cystic fibrosis since birth and spends more than an hour every day getting treatment to keep his lungs clear.

Nelson wasn’t the only one getting into the spirit of things. Big brother Cooper, 14, and friends Brenna Krueger, 9, of Bismarck, N.D., and Gabe Smith, 10, of West Fargo, donned elf costumes and helped distribute small gifts to Nelson’s Westside Elementary classmates, who had arrived by bus.

An informal parade through West Acres Mall delivered Nelson and his entourage to a trolley bus. The bus — with a police escort — delivered the young Santa to Island Park, where a horse-drawn wagon awaited.

Never mind that reindeer, sleighs and snow are in short supply. Nelson said he loved the mile-long carriage ride down Fargo’s main street to Sanford Medical Center. Hundreds of well-wishers, including many with handmade signs, lined the route.

At Sanford, Nelson set about his most important and meaningful work of the day, handing out dozens of gifts and treats to children at the hospital.

“The best thing about being Santa, well, is just giving kids presents and seeing the smiles on their faces,” said Nelson, whose wish was one of more than 50 sponsored by Macy’s across the country Friday.