Family who lost son in shooting rallies together for Christmas 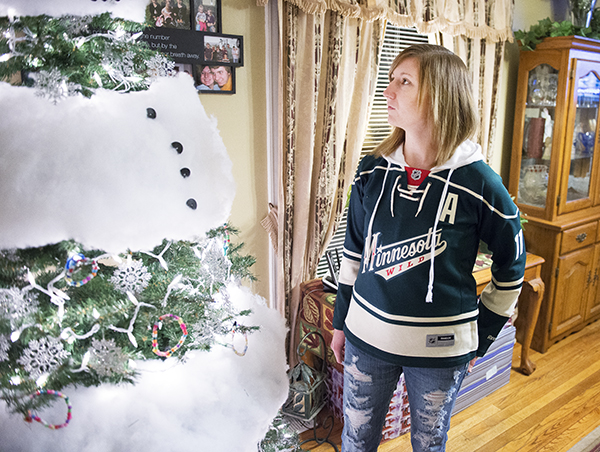 Christmas won’t be the same for Cady Baseman and her family this year, or for years to come. Her brother, Cody Baseman, died of a gunshot wound in September. — Colleen Harrison/Albert Lea Tribune

Every year, the weekend after Thanksgiving, Albert Lean Lori Callahan and her three children would gather at her home to decorate a Christmas tree.

Since the children were born, Callahan bought an ornament every year for each child. The children, now adults, would separate their ornaments into different piles before beginning to put them on the tree.

This year, things are different, said her daughter, Cady Baseman. The ornaments are still in a box.

It has been almost three months since the family found out one of Callahan’s other children, Cody Baseman, 28, died Sept. 24 at 1510 Academy Ave.

How he was shot has not been released, and the Albert Lea Police Department is awaiting final autopsy results in the case.

“It has been really tough on all of us, especially with the holidays being so close to all of this happening,” Cady Baseman said.

To brighten things up for her mother, she said she figured she would do something different for her mom’s Christmas tree this year. Her mom loves snowmen, so she decorated it to look like one.

“She was amazed by it,” Cady Baseman said. “She said it was done out of pure love.”

Cady Baseman said her older brother, Cody, was the kind of person who would drop anything he was doing to help someone — even if it was 2 o’clock in the morning.

He worked at E-Z Rental at the time of his death and previously had been a supervisor at Hardee’s. He loved to fix cars and had four children, ages 9, 5, 2 and almost 1.

“Anything to do with family he’d be right there,” she said.

Cady Baseman and Callahan’s boyfriend, Darin Halstead, said Cody Baseman was a happy person. He had made plans to help Cady Baseman take down her soft top on her Jeep the next day, and his 5-year-old had school pictures.

Cady Baseman and Halstead said Cody Baseman often came by to visit his mom and help out.

“You can’t replace him,” Halstead said. “He always did everything for you. He couldn’t say no. He wasn’t my real son, but I felt like he was.”

Cady Baseman advised others who have gone through a recent loss to be there for their other family members, even though it may be tough.

She said she has rearranged her schedule to try to be around for her mother. She had worked the evening shift at the care center in New Richland before her brother’s death, but now works the morning shift, so she can be there with her mom.

“Cody would be here every single day,” she said. “He basically lived here. I know I can never fill that void of his space, but I’m trying to make it easier by being around more.”

Halstead said it is devastating to lose a loved one the way his family did, but he encouraged other families in a situation like his to love each other and to try to be strong.

“You really don’t feel like doing anything at all, but you know you have to keep going,” he said.