A celebration of life for Kyle C. Steele of Glenville will be from 2 to 7 p.m. Monday at Bonnerup Funeral Service in Albert Lea. 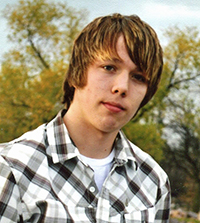 Kyle was born Nov. 19, 1992, in Albert Lea, the son of Debra (Ihme) Wright. He graduated from Albert Lea High School in 2011. He had been employed by Applebee’s in Albert Lea.

Kyle enjoyed music, dancing, laughing, making others laugh, watching movies, playing video games and hanging out with his many, many friends. He loved to spend time with his brothers Luke and Arthur; cousins Dylan and Curtiss; but especially spending time with his girlfriend, Allyssa. Bathtime with his dog, Rex, was also important.

He was preceded in death by his grandfather, Ethmer Wright.