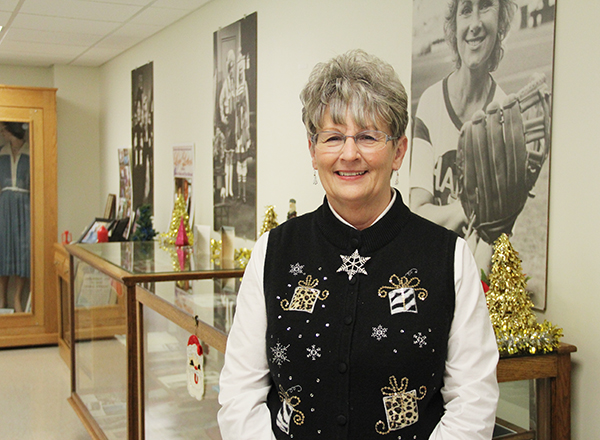 Pat Mulso is retiring as the executive director of the Freeborn County Historical Museum after working in the position since 2005. -Sarah Stultz/Albert Lea Tribune

After about 10 years as the executive director of the Freeborn County Historical Museum, Library & Village, Albert Lean Pat Mulso will retire on Jan. 2.

Amy Gauthier, who has previously worked for the United Way of Freeborn County and the Albert Lea-Freeborn County Chamber of Commerce, will take over as the new executive director.

“I’ve really enjoyed my time here,” Mulso said. “I’m the type of person where I have a goal or a vision, and then I feel like it’s time for new visions and new goals.”

Mulso said with the help of many volunteers and the staff at the museum, she achieved the two main goals she wanted to accomplish in her time as executive director: to expand the main building and to get all of the buildings in the historical village up to date.

She began working at the museum in September 2005. Before that, she had worked in a variety of businesses including as the owner of her own upholstery business, a sales representative for Avon and even a mortgage broker.

Mulso, who has lived in Albert Lea since 1980, got involved with the museum as a volunteer in 1988 as the co-chairwoman of the “Freeborn County Heritage Book” with Bidney Bergie. She also was part of the board of directors.

Mulso said she got interested in history and genealogy when she was 12. She grew up in a small community and would walk through the cemetery with her father, who would tell her how people were related to her.

When Mulso first started at the museum, she said she changed several of the exhibits and updated the library.

She has worked to get computers for the public to use, and Ancestry.com is now available for people coming in to do research.

She also helped coordinate several projects in the historical village, including foundations under two of the log cabins and the shoe shop, roofs on almost all of the buildings, an awning over the railroad exhibit, as well as sidewalks and drainage, to name a few.

In 2007, she started working on the dream to expand the museum and started drawing up some ideas.

That same year “Happy Days” actress Marion Ross donated her 1955 Ford pickup to kick off the building drive, and Mulso and her husband, Arnie, came up with the idea to get people to donate to keep it in Albert Lea.

Mulso said the truck was appraised at $17,000, and the museum raised $40,000 with people donating to keep the truck here.

After that, she and the others on the board moved forward with raising money, with a few estates donating money toward the cause.

In 2010, she and the board started talking to architects and getting drawings and cost estimates completed.

“Then it became a reality,” she said.

Once they raised a million dollars in pledges and donations, they decided to move forward on the $1.7 million project and broke ground on May 9, 2012.

She said it wasn’t an easy project to do while keeping the museum open, but thanks to the contractors, everything went as smoothly as it could.

The expanded building opened in September. It was nearly double in size.

She said she is pleased with how the museum turned out, noting she thinks Freeborn County has the nicest museum in Minnesota and the surrounding area.

“I’ve been to a lot of museums, and I think one of the nicest comments we get on a regular basis is your museum is so clean and well organized,” she said. “I am proud of that.”

As of this month, Mulso said the museum only as a remaining balance of $175,000 left on the project.

She said 100 percent of the pledges made have been paid.

“Times are good and bad, but to have 100 percent I think that shows the dedication of our community and their support for preserving our community,” she said.

She said her favorite part about working at the museum was that she had something new to do every day.

“You never know who’s going to walk through the door or what someone wants to donate,” she said. “The hardest thing is to turn away someone’s treasure, but we can’t always take everything.”

She has also enjoyed seeing volunteers get involved. She said on average there are about 150 hours a week in volunteer help.

“We couldn’t keep our doors open without it,” she said.

The museum gets visits from people from between 35 and 40 states and between 10 and 16 countries in any given year.

After her retirement, Mulso plans to still be involved with an archiving project at the museum that was made possible through a grant from the Minnesota Historical and Cultural Heritage Grant.

She is also taking over a leadership position with the Experience Albert Lea group, which aims to promote Albert Lea.

One of her larger tasks is planning a family reunion with about 1,000 people in Ohio.