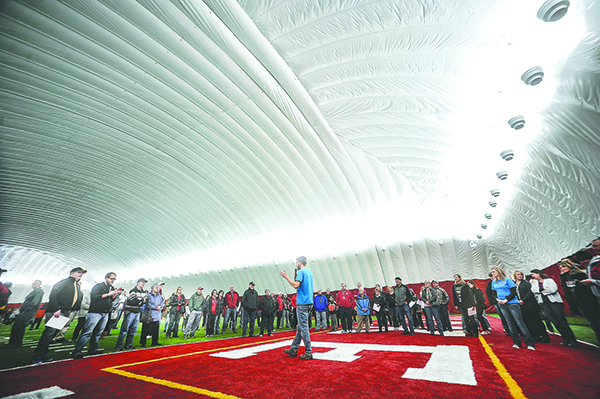 Softball and baseball players took swings in batting cages while a group of boys played flag football a few feet from where a line formed for a bouncy castle. Another group played kickball, and others passed soccer balls as many simply mingled to check out the seasonal dome over Art Hass Field.

After almost a year of planning, discussion, and work to renovate and add artificial turf at the Wescott Athletic Complex, Austin Public Schools and Vision 2020 unveiled a new seasonal dome to hundreds of community members, who got to try out various recreational opportunities under the spacious dome.

“I love it,” Austin resident Justin Peterson said. “I think it’s the best thing ever for kids to get to come out here and do something like this rather than sit in their homes and play video games.”

Peterson tossed a football with his son, Micah, 8, along with his friend’s sons, Reilly and Rauhan.

Peterson and Micah plan to be regular visitors to the facility this winter. Along with Micah playing in a dome youth soccer league, they live just a few blocks away and plan to take advantage of open dome hours throughout winter.

“For the kids to do something this winter, you can’t beat it,” he said. “We need more things like this.”

‘Here we have it’

The open house capped a year that saw several months of discussions and work at Wescott on the $5.2 million project to bring the dome and artificial turf to the fields, which was funded by $2.5 million in Austin Public Schools school reserves and a $2.7 million grant from The Hormel Foundation.

Vision 2020 Director Greg Siems said the dome fills a need for Austin. Through community surveys, Vision 2020 sought to gauge ways to improve recreational opportunities. Siems said one of the biggest things that came up was the need for a covered, seasonal field for multipurpose uses.

“Here we have it,” he said. “This really is such a great thing. We have the perfect conditions for year-round recreation right here in Austin.”

Angie Goetz, chair of the Austin Public Schools board, thanked The Hormel Foundation and Vision 2020 for making the dome a reality.

“The dome is an asset to Austin that will be used in so many different ways for years to come,” she said. “I truly believe there are great things in store for Austin. Our greatest days are yet ahead.”

“With the dome here, it’s really just Phase 1 of this broader effort to expand recreational opportunities in Austin for people of all ages,” Siems said. ”And of course Phase 2 will be the new, physical rec center building, and we’re hoping to be able to share more details about that project with you in the coming months.”

But on Saturday, the focus was on showcasing what the dome will offer during the winter.

“It really truly is a community facility,” Siems said. “And we’re so happy that it’s finally up and it’s finally here and everybody can take advantage of it.”

Austin Superintendent David Krenz said it’s been a great process and partnership with the community and the various organizations.

“It surpasses anything that I envisioned,” he said. “You see it and you see all the activities going on here, you see the excitement of the community, and it really is going to enhance not just what can happen for our youth, but for Austin as a community.”

Krenz called it an exciting day to unveil something that will set Austin apart.

“It’s an amenity that most communities don’t have,” he said. “And here in Austin, people can see: Here’s something else that makes Austin a better place to move and live and raise my family.”

‘Weather’s no longer even a factor’

Though Saturday morning saw cloudy weather with brisk temperatures in the upper 30s, athletes, children and families from across the community tossed footballs, kicked soccer balls and played in light jackets or short sleeves in the dome.

While the dome presents many possibilities for Austin’s young athletes, Austin baseball coach Chris Gogolewski was happy to have some certainty: They don’t have to schedule early practices around unpredictable spring weather.

“Weather’s no longer even a factor for us,” he said.

But as Gogolewski stood between two batting cages and looked around the dome, he admitted envisioning the facility and seeing it in person proved vastly different.

“To me, trying to wrap my mind around it right now, of all the possibilities we have, I can’t do it,” he said.

Along with two batting cages running along the south end zone, Gogolewski saw many possibilities for winter workouts and spring practices across the spacious football field.

Traditionally, the boys kick off baseball practice in mid-March, but they hold open gyms — soon to be open dome practices — in February. But with the cages are already up, Gogolewski envisions his players being able to come in throughout the winter to throw and hit.

“I don’t have to worry about that transition of, ‘You need to get your arm in shape, get your legs in shape,’” he said, adding that they’ll be able to run in the dome instead of in the halls of the school.

Past practices in school gyms have proved tight for space and offered limited practice abilities and a predictable surface for ground balls. Gogolweski hit infield with a few players early Saturday and found the turf more conducive to baseball.

“There’s not a true hop coming off of the turf either, so they’ve got to read either a skip or a roll, so it really gets them thinking live baseball,” he said.

The dome is also large and open enough to hit fly balls, popups and to even scrimmage.

“This opens up a whole new realm of possibilities of live practice instead of bing confined into a gym,” he said.

Gogolweski sad he can have players from varsity, junior varsity and C-squad all work in the dome at once, and he said they’d be able to do a variety of different drills at the same time.

“This is as good as indoor baseball can be for Austin,” he said.

But it’s not just the baseball team, as Gogolewski saw opportunities for all teams and the community at large.

“It’s just a great opportunity for anybody who’s interested in being active,” he said. “This isn’t just football or baseball. This is everything.”

Baseball player Jason Stoulil and some other athletes have talked about working out at the dome in the mornings, and they’re talking about getting a batting schedule to hit a few times a week.

Stoulil, who plays hockey, football and baseball for the Packers, got to try out a variety of activities in the dome, including football, kickball and the new batting cages.

Along with being better for taking grounders in baseball, Stoulil said it’s better for a wide range of sports that aren’t as easy to play in a gym.

“It’s more suited for sports that aren’t basketball,” he said.

Softball players Hannah Biwer and Adison Medgaarden, both sophomores, took batting practice in the batting cages Saturday and were happy with the site.

“I think it’s pretty cool that we can use it when ever want, I guess, and come and use the batting cages,” Medgaarden said.

In the past, they’ve had few opportunities to play during the winter outside of traveling to camps in other communities.

But the dome isn’t just for high school athletes.

Alex and Michelle Bumgardner brought their son, Eli, 2, out the check out the dome and were impressed with the site and happy that their young family will have opportunities for years to come.

Alex, echoing sentiments made by many people checking out the dome Tuesday, said he was surprised by the size of the dome, which covers Art Hass football field and the artificial turf sideline.

“You don’t realize how big a football field is until you’re on it,” he said. “And I think that there’s enough space to do a lot of different activities simultaneously, so I think it will be good for all ages.”

With a 2-year-old, the Bumgardners may have to wait for using some parts of the dome, but Eli was kicking a soccer ball around and enjoying a bounce house on Saturday.

However, Austin Facilities Coordinator Dan Ball said he’s been in touch with some day cares and a moms group about potential times for them to come to let little ones burn off some energy indoors.

The Bumgardners also said it would be cool to see an indoor playground for kids like Eli as part of the rec center project.

As Peterson tossed a football with Micah, he promised they’d be back often during open hours.

“We need stuff like this for the kids do or else they’re going to get in trouble,” he said.

When Ball looked around at everyone enjoying their Saturday at the site, he said that’s been the goal all along — seeing families and children out being active in the dome. However, it might not be exactly what people expected.

People entered the dome through a set of silver revolving doors, and Ball said the dome feels much bigger than when you come out to watch a football game.

“It’s pretty spacious in here, and you’re going to be able to do a lot of things,” he said.

However, he noted there’s still work ahead in terms of making arrangements for open days when kids can have a variety of opportunities to check out activities.

Along with open hours, groups like Austin Parks and Rec and the YMCA could host similar open houses in the future, according to Ball.

Ball will run many of the rentals and organize many of the open times for the facility. Open hours for walkers should kick off this week, likely from about 6 a.m. to 8 p.m., though plans are still being finalized.

Groups who want to rent the dome for parties, games or practices must go through either the school or Ball to reserve a time. People who wish to walk can stroll right in.

Siems urged people to rent the dome soon if they’re looking to use it for an event, as he said they’re already seeing incredible demand from within Austin and from outside groups.

The dome is already attracting athletes and league teams from outside of Austin too, as Ball has already heard from teams in Albert Lea and Owatonna expressing interest in renting the site. The hope is that those out-of-town athletes will also attract retail dollars for the community.

But of course, People like Siems see the dome as a great asset for Austin athletes and general community members.

“Everybody benefits from this, from having something like this in our town,” Siems said. “I know it’s going to offer so many great opportunities for our youth sports teams, for community groups that tare looking to use the space and also for just the average person that wants to get out of the cold and use the walking path.”