Taxidermy’s work is as diverse as its customers 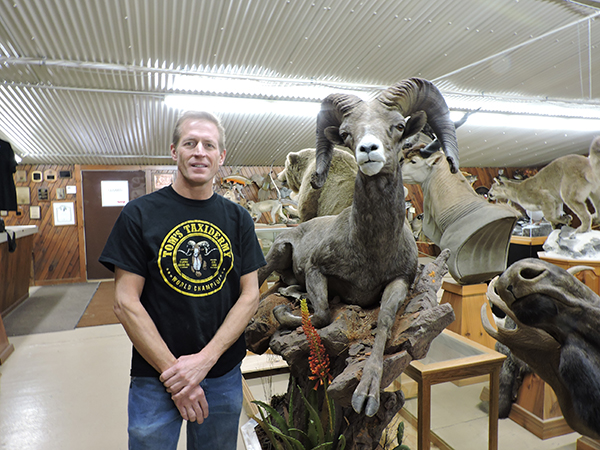 Tom Lenort of Tom’s Taxidermy poses with a desert big horn, one of the many displays at his shop, 28034 770th Ave. in Clarks Grove. – Kelly Wassenberg/Albert Lea Tribune

CLARKS GROVE — Back in 1982 Tom Lenort was just getting started as a self-taught taxidermist. His customers were local and so were their trophies, including whitetail deer, pheasant, walleyes and ducks. Times have changed.

Tom’s Taxidermy handles much more than local fauna. According to Lenort, his business has  handled international orders since 1989 when orders started coming in from Asia, Africa and South America. Specimens ranging from elephants, rhinos, hippos, lions and leopards have been sent to him from sportsmen who travel abroad and have their trophies sent to him before returning to the States.

Lenort said he’s fortunate enough to have been able to work on almost everything that can be legally hunted, collected and imported back into the country. However the process of doing so can be quite lengthy, as there are a lot of inspections a package must pass before it can enter the country.

The United States Fish and Wildlife Department, United States Department of Agriculture and U.S. Customs Department all have special rules and regulations, which must be followed in such circumstances. As a result, it can take anywhere from four to 18 months just for a specimen to pass inspections. Lenort said properly- salted and stored skins are still viable to use as long as they’ve been kept in the right conditions.

The wait isn’t over once the hide makes it past customs, though. Even domestic customers can expect a long wait, as it can take as long as six months for a skin to be returned from a commercial tannery. From there, customers have to wait on a first come, first serve basis for Lenort or one of his staff members to get to their order.

“It all varies on the time of the year and the individual trophy,” Lenort said. “Some things we get back in five months, but our typical range is about 10 months to a year turn around time for a completed project.”

In recent years, Lenort and his staff — which consists of two full-time and two part-time employees — produce about 800 to 1,000 trophies a year. He could do more, but is content with his businesses size. He believes in quality, not quantity.

“The most important thing is the finished piece,” Lenort said.

His display room and digital photo library of trophies give customers different ideas on poses, habitats and scenery, as well different kinds of custom woodwork and cabinetry that can accent or enhance the piece. While almost 100 percent of Lenort’s work is contracted, he can always accommodate orders for non-hunters who would like a piece to create a certain look.

Unless you have a friend who has a piece done by Lenort and his crew, his showroom will be the only place you can see his work. Lenort doesn’t have a website. The majority of Lenort’s customers, including those from out-of-state, are brought to him through word of mouth.