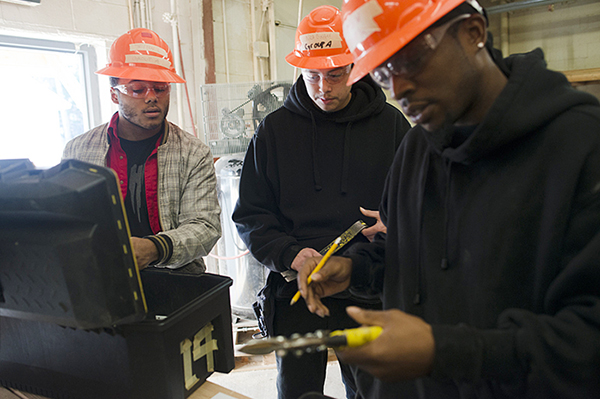 New students in the hand and power tool class go through the tool inventory to familiarize themselves with the toolbox they will use Nov. 23 at Summit Academy OIC in Minneapolis on. — Matthew Hintz/for MPR News

Economic sages have warned for years that Minnesota’s much higher jobless rates for blacks and other minorities would cripple the state’s prosperity. Yet, not much changed.

Now with only eight unemployed people for every 10 job postings in Minnesota and baby boomers retiring in droves, it’s increasingly a worker’s job market. That’s prompting employers to consider hiring people they may have overlooked in the past.

“Companies are desperate to get people into these jobs and they’re being much more creative in reaching out to different communities to get these people on board,” said Ted Chalupsky, CEO of the Right Staff, a staffing and recruitment agency. More employers are offering internships, on-the-job training and more flexibility in the skills and experiences they’re demanding, he added.

At Summit Academy OIC in north Minneapolis, leaders said they’re placing 90 percent of graduates from their vocational training programs, up from only about 50 percent six or seven years ago. The organization trains people for jobs in construction and health care, areas in which employment is projected to grow faster than average and entry-level positions require relatively little training.

Most of the students are people of color who’ve been unemployed or working minimum wage jobs. Many have had trouble with the law. They come looking to put their problems behind them and get trained for jobs with decent pay and, hopefully, a future. For the two-thirds or so of students who finish their training, the wage gains are impressive.

Students come to Summit with earnings averaging about $4,000 a year, and graduates leave for jobs of “$30,000 in just 20 weeks with no debt,” said Summit Academy President Louis J. King II.

That’s the kind of turn Harmony Jacox is hoping for. A single mom of two, she was tired of working a couple of minimum wage jobs to make ends meet. She’s in Summit’s carpentry program.

“It’s fast track and you can come out with a career with potential to make increased income,” she said one recent day at the school. “I’m looking for stability, not just a job. I want a career, something long-term.”

In the 1990s, Minnesota’s workforce was expanding at a healthy clip of 40,000 people a year. But it’s been growing at about a fifth of that rate lately and will slow even more, as more baby boomers age and retire.

If businesses are to grow and the region is to reap the economic and other benefits that go with that, companies will have to increase employment among African-Americans and other minority groups. Their populations are rising, but they have historically had high unemployment rates.

The region would benefit greatly if minorities came to enjoy the same success in the job market as the state’s white population, says The Itasca Project, a business coalition that includes more than 40 area CEOs and other civic leaders.

“It is a very, very compelling business case for us as businesses to work on being better on including diverse people in our workforces,” said Hewitt, who chaired The Itasca Project’s committee on workforce disparities.

Equalizing white and minority employment outcomes would add about 120,000 employees and billions of dollars of personal income to the state’s economy by 2040, his panel estimated.

There’s much work to be done, Hewitt acknowledged. But he said companies like his are making progress by addressing internal biases in hiring and other barriers to employment. Thrivent, he added, has “doubled the number of people of color entering our organization” over the past 18 months.

State lawmakers also appear ready to dive into the challenges of employment and people of color.

State Senate Majority Leader Tom Bakk insisted that any special session to extend jobless benefits for laid off taconite mine workers should also address economic disparities that black Minnesotans face. The Dayton administration last week announced more job training grants to help minorities and other groups that have struggled in the job market.

But with the jobless rates of non-white Minnesotans stubbornly higher than for whites, the numbers may not move without a substantial change in the labor market’s supply and demand equation. King said Minnesota needs a much more concerted, coordinated effort to address unemployment among Minnesota’s minority groups.

The state, he added, has a clear choice on how to spend taxpayer dollars.

“Either double down on welfare charity and prison or find ways to build a system and develop strategy that puts these people to work,” he said. “And we currently do not have one.”