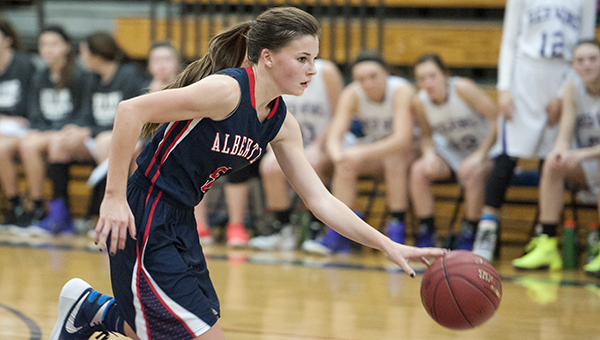 Albert Lea’s Rachel Rehnelt brings the ball up the court Tuesday in the second half against Red Wing at Albert Lea. — Micah Bader/Albert Lea Tribune

The most scoring production of the season wasn’t enough to lift the Albert Lea girls’ basketball past Red Wing.

Rachel Rehnelt led all scorers with 17 points, but the Tigers fell 74-36 Tuesday at Albert Lea.

Along with hitting a pair of 3-pointers, Rehnelt was 5 of 6 from the charity stripe. Albert Lea coach Gina Klennert encouraged Rehnelt to attack the rim.

“It’s something that I’ve wanted to see her do within the offense, and tonight was the first time she’s really been focused on getting to the basket,” Klennert said. “She was rewarded for her efforts, which was nice to see.”

Also scoring in double figures for the Tigers (0-3, 0-3 Big Nine) was Fran Eckstrom, who had 11 points, three rebounds and a steal.

“She stepped up and was willing to take some shots that she’d normally pass up,” Klennert said.

Last year, the Tigers split the two-game series with the Falcons. Faribault’s 62-39 win on Feb. 3, 2015, snapped 10 straight wins by Albert Lea in the head-to-head series.