Funeral services for Derek Michael Bute of Winona will be at 2 p.m. Friday at Alden-Conger High School in Alden. The Rev. Greg Ofsdahl will officiate. Military honors will be accorded by the Minnesota National Guard honor guard. Interment will be at Alden Cemetery. Visitation will be from 4 to 7 p.m. Thursday at Redeemer Lutheran Church in Alden and one hour prior to the service at the high school. Online condolences are welcome at www.bayviewfuneral.com. 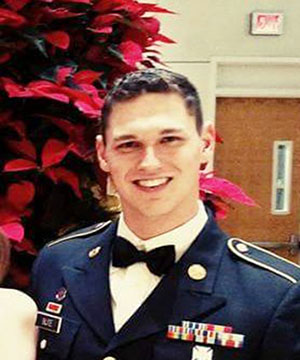 Derek was born Aug. 31, 1990, at Naeve Hospital in Albert Lea to parents Michael James Bute and Diane Ardus (Sanderson) Thoms. A 2009 graduate of Alden-Conger High School, Derek was an exercise science major at Winona State University with intent to pursue his physicians assistant certification following his graduation scheduled for May 2016. Derek was a patriotic servant to his country as a member of the Minnesota National Guard Red Bulls. He was a combat medic with the HHC 2-135 Infantry Battalion out of Mankato and deployed with his unit to Kuwait in 2012. He most recently held rank of sergeant and was a medic team leader and received many military awards.

Derek was a member of Redeemer Lutheran Church in Alden as well as an active member within the local athletic community including being a participant of both the Albert Lea wrestling and Alden-Conger football programs. Derek had a love for the outdoors and staying physically fit. He enjoyed deer hunting with his dad, Uncle Scott and his cousins, waterfowl hunting and camping with his mom and stepfather and loved fishing whether at the family cabin or with his Sanderson uncles at Farm Island Lake. He was a devoted follower of Minnesota sports and was a true Vikings fan. Derek and his father went the distance this past spring in the Freeborn County Bike-a-thon. He participated in many competitive events including several Tough Mudders. He took pride in working with a youth mentoring program in Winona.

Derek will be deeply missed by countless family and friends, his beloved aunts, uncles, cousins and community admirers.

He is survived by his parents Michael and Jane Bute of Alden and Diane and Lon Thoms of Albert Lea; sister, Jennifer Bute, and Travis Kasper of Austin; sister, Emily, and Matt Hassing of Alden; brother, Michael Reyerson of Ames, Iowa; and brother, Jarrod, and Kimberly Robran and their children, Leah and Jackson of Jordan; as well as his cherished grandparents James and Margaret Bute of Alden, Ardus Sanderson of Albert Lea, Colleen Nelson of Albert Lea and Lynn and Judy (Thoms) Koehler of Fairmont.

He is preceded in death by grandparents Tenford Sanderson and John C. Nelson.

Derek was a kind and special person who loved helping others, giving the best hugs, and always putting a smile on your face. All who have had the honor of knowing him are truly blessed to have held his light in their lives.