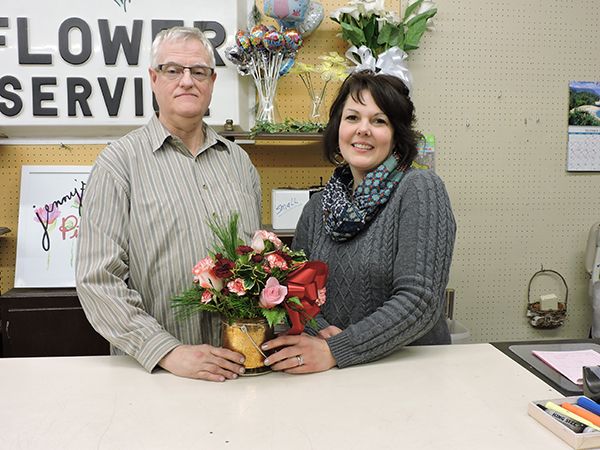 Dick Meyer of Dick’s Flower Service will work for Jenny Lutteke as she hopes to find the same success under the name of Jenny’s Pink Petals Flower Shop. – Kelly Wassenberg/Albert Lea Tribune

WELLS — The business district in Wells has seen many changes over the last three decades. One only needs to speak to business owner Dick Meyer for affirmation.

“A lot of businesses have come and gone, but we’ve been able to years as owner of Dick’s Flower Service and Plant Gallery.

Meyer would have started his 33rd  year in business in May. Instead, he made the decision to retire and sell his business to Wells resident Jenny Lutteke.

While Meyer had first considered selling his establishment 15 years ago, he was adamant he wanted to sell it to someone capable of successfully taking over the store and began actively keeping his eye open for someone to fit the bill.

It was five years ago that he first approached Lutteke, but at first she didn’t give his words much merit.

“I thought he was joking,” Lutteke admitted. “And then I come in a couple years later and he said, ‘No, I was serious.’ I said, ‘When you are ready to retire, let me know.’”

She received that phone call this fall; however, Meyer wasn’t about to let her skills go untested.

After expressing interest in Meyer’s proposal, Lutteke was invited to spend a week working with Meyer. The time would give Lutteke the opportunity to decide if the position was right for her and Meyer time to see if Lutteke was capable of successfully taking over the business.

“I figured if she wasn’t going to be able to handle it, I was going to tell her right up front that you’re not going to be able to do this,” Meyer said, noting he wouldn’t have considered selling the business if he couldn’t ensure his customers would be properly taken care of by his successor.

“I’m really excited. I didn’t think this day would come,” Meyer said. “I never thought I would find someone to take the business over.”

Meyer said Lutteke did a marvelous job working for him for that week and continued to work for him while the details of the sale were ironed out. Now, he’s working for her. The business was officially turned over to Lutteke on Wednesday.

Meyer and his wife, Mary, will continue to work at the floral shop at least through August to make sure the transition is smooth through the business’ busiest times on Valentine’s Day and Mother’s Day.

Lutteke noted she doesn’t plan to change too much now that she owns the business. The building will be decorated with a shabby chic kind of look, which includes more pink, and new signage will be added to reflect the establishment’s new name: Jenny’s Pink Petals Flower Shop.

Otherwise, she said customers will be able to expect the same quality service and products with the same attention to detail that Meyer is known for.

“We’ve got a lot of good customers in the area, and we still want them to come back to give Jenny’s Pink Petals a try,” Meyer said.