Funeral services for Louise F. Knutson, 93, of Albert Lea will be at 2 p.m. Saturday at the Bayview/Freeborn Funeral Home chapel. The Rev. Roger Haug will officiate. Interment will be in Greenwood Cemetery in Glenville. Visitation will be one hour prior to the service at Bayview. Online condolences are welcome at www.bayviewfuneral.com. 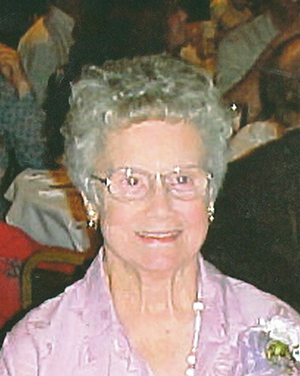 Louise Florence Knutson was born Nov. 6, 1922, in Deer Creek, Iowa, the daughter of Jesse and Ileene (Nash) Cunningham. She grew up in Glenville and attended school in Glenville and Albert Lea. On Feb. 26, 1940, Louise was married to Luman Knutson in Northwood. She was a member of Grace Lutheran Church where she had been baptized and confirmed. She was active there in the Caring and Sharing group and taught Sunday school in her earlier years. Louise worked for the Albert Lea school district in the cafeteria, retiring in 1986. She enjoyed bowling and was a long-time member of the Supper Skippers League. Other interests she had include playing cards, fishing for Northerns and following the Minnesota Twins and Minnesota Vikings. Blessed be her memory.

Louis was preceded in death by her husband, Luman; her son, Richard Knutson; her parents; her brother, Louis Cunningham; and numerous brothers-in-law and sisters-in-law.