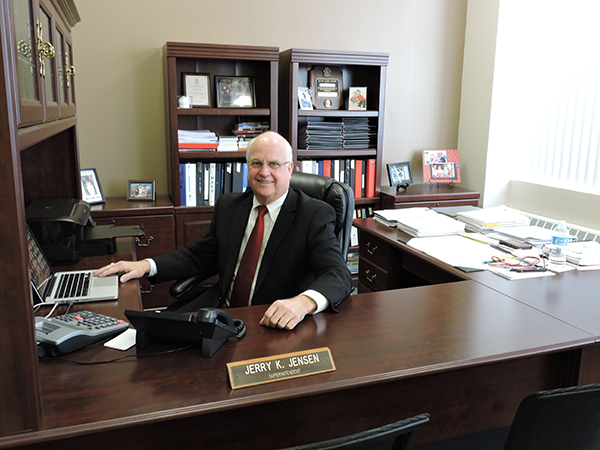 United South Central Superintendent Jerry Jensen will be at his desk until June 30 when he retires after 30 years as superintendent, seven of which were at the school district in Wells. – Kelly Wassenberg/Albert Lea Tribune

WELLS — When United South Central Superintendent Jerry Jensen first took his position at USC, he was a little hesitant to sign a three-year contract. Now, in his seventh year at the school, he has stayed far longer than he anticipated and has decided it’s time to say goodbye.

“I just thought it was time for me to move into retirement — not so much away from what I’m doing — because I love it,” Jensen said of the decision he announced at last month’s USC school board meeting.

“There have been so many things that I have felt privileged to be a part of — and I’ll stress the words part of,” he said.

One of the most visible accomplishments he’s seen during his tenure at the school is the new facility, which is in its second year of operation.

“If I had any part of it, it was presenting information, but the public actually decided they wanted a new facility,” Jensen said.

“The testing scores have gone up and we’ve been a reward school in our elementary for the last three years, which is the top tier of elementary schools in terms of performance,” Jensen said. “I think that’s a huge accomplishment. Again, I have very little to do with that.”

Jensen said the teachers came together to determine what areas the students needed assistance in and identified strategies that would help them succeed. The teachers then received the support they needed from the school board so those strategies could be properly implemented.

The one-to-one initiative is new to USC as of last year. Through the program, students in kindergarten through eighth grade have iPads, and high schoolers receive MacBook computers to use throughout the school year.

“I think that was a big move technology-wise,” he said, noting that the newest phase of education will be assisted by technology.

Perhaps the most obvious change at USC to which a superintendent would be credited for is the budget. Back when Jensen started, the school board believed it was in statutory operating debt. According to Jensen, that wasn’t the case, but the budget was still in dire straits.

“Right now I think we are in pretty good financial shape. Again people think, ‘wow, I worked wonders on that, but in reality it was the board of education that was in place and the interim superintendents that were here the year before I came,” Jensen said. “They made some really tough decisions and put some things in place that we carried out, but those were the key things that helped the district bounce back financially.”

For the past seven years Jensen has split his time between his home in Lake City and an apartment he rented in Wells, and for that he is grateful. By not driving back and forth between the two locations, he was able to become a part of the Wells community.

“I really believe that an important part of the job is to make sure you’re available — that the kids know you are interested in what they are doing, but also to be out in the community so people have the ability to come up to you if they have issues or concerns,” he said.

“I’ve had a great school board here,” he said, referring to both current and previous members during his tenure. “They’ve always really strived to provide the best they could for the kids.”

He also credited the staff he worked with.

The USC School Board now has the task of hiring Jensen’s replacement, who will take over after his retirement on June 30.

According to Jensen, the board has not decided if it will look for a full-time or part-time superintendent.

He does feel there are a lot of good people out there to take his place, yet it’s still hard for him to think of leaving USC, even if he knows the school is in good hands.

“This is my kind of community,” Jensen said of the ag-based community with its segment of blue-collar workers. “That’s my whole background. That’s how I was raised.”

“It’s been a great experience,” he concluded. “I’m gonna miss it.”