Vernon Kenneth Otto was born Sept. 22, 1922, in Buffalo Center, Iowa, the son of Ernest and Hilma (Swanson) Otto. The family moved to Minnesota where Kenneth attended school through the eigth grade at Geneva. They then moved to Albert Lea where Kenneth graduated from Albert Lea High School in the class of 1940. After graduation he worked for Rock Island Railroad. In 1941 he moved to Austin and went to work for Geo. A. Hormel Co. 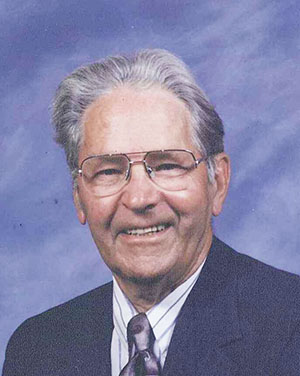 In 1942 Kenneth joined the United States Army and after 13 weeks of infantry training at Fort Wolters, Texas, he was sent to the South Pacific for 32 months with 37th Infantry, Division S, a division which was on the front lines for over 300 days. He served on New Hebrides, the Goudal Canal and Bougainville and was in the first wave to hit the beach on Luzon. Kenneth was the recipient of two Bronze Star medals.

After his discharge he returned to Austin and went back to work at Hormel Foods Corp., retiring in 1982 after 41 years.  He was married to Gladys Lerum on Jan. 1, 1949, at First Lutheran Church in Albert Lea, where they lived until 1952 when they moved back to Austin where they have lived ever since.

Kenneth was an avid sports fan; he enjoyed playing baseball and coaching little league for many years. He played fast pitch softball, liked to bowl and enjoyed watching the Twins and Vikings and attending University of Minnesota Gophers football games. He enjoyed the outdoors, hunting and fishing and got a lot of satisfaction out of training his own hunting dogs.

In his retirement he liked to go to flea markets and antique shows, enjoyed gardening and his grandchildren and going to their ball games. He was a charter member of Our Savior’s Lutheran Church, a member of the Albert Lea Fast Pitch Hall of Fame, belonged to the 37th Division Veterans Association and the American Legion and was a life time member of Veterans of Foreign Wars and Disabled American Veterans.

Kenneth was preceded in death by his wife of 42 years, Gladys; his parents; brother, Lester; sisters, Bernadean and Dorothy; a twin sister who died at birth; and nephew, Dale Otto.

He is survived by daughter and son-in-law Pam and Dallas Apold of Austin; grandchildren Patti Clennon Kruger of Stewartville and Marty (Andrea) Clennon of Austin; great-grandchildren Isabella and Ava Kruger, Elizabeth and Owen Clennon and Gavin Miles; and nephews and nieces.

Funeral services will be at 2 p.m. Monday at Our Savior’s Lutheran Church. The Rev. Karen Behling and intern Lisa Meshke will officiate. Interment will be at Oakwood Cemetery with Austin Post No. 91 American

Legion and Olaf B. Damm Post No. 1216 Veterans of Foreign Wars in charge of military rites. Visitation will be from 1 p.m. until the time of the service at the church. Clasen-Jordan Mortuary is in charge of arrangements.