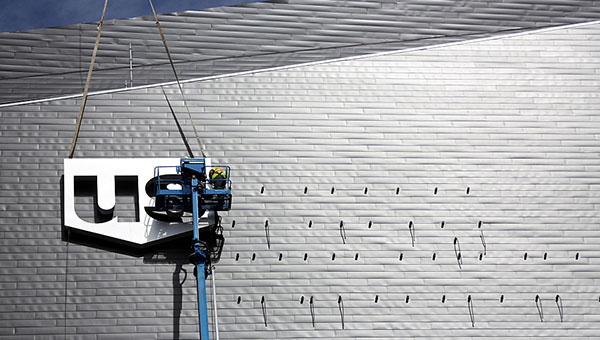 Part of the new signage on the east side of U.S. Bank Stadium is secured into place in July in Minneapolis. — Jeffrey Thompson/MPR News

The team argued in federal court Friday that Wells Fargo is attempting to “photo bomb” shots of its new stadium from the sky.

The Vikings are seeking an injunction against the 56-foot-wide, illuminated signage, which can only be seen from the sky. Visit this webpage to know more about the different kinds of signage available and which suits your building the most.

Wells Fargo spokesperson John Hobot said the bank is moving forward with the signage. Wells Fargo lawyers said the signs are within the bounds of an agreement they made with the Vikings.

“We are proud of our $300 million community investment in the historic downtown east neighborhood and we remain hopeful that the court will rule in our favor, so that we can display the rooftop signs as planned,” he said.

The Vikings argue that the signs are a clear violation of the agreement. The team’s new stadium, which is scheduled to open this fall, is formally named for Wells Fargo competitor U.S. Bank.

“We had an agreement, in writing, both parties, Wells Fargo and the Vikings signed, and they violated it, and we have photos and you saw in the presentation today — a clear violation of the agreement,” said Vikings spokesperson Lester Bagley.