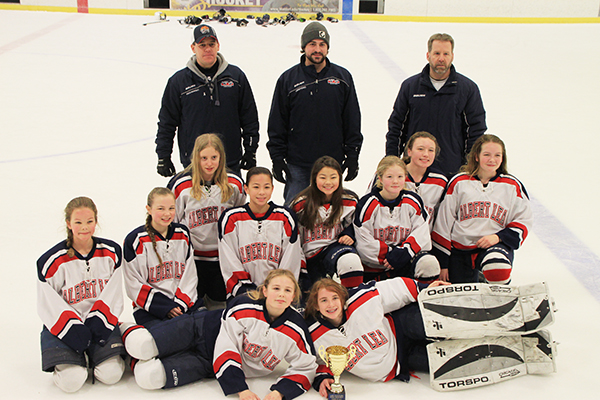 According to a press release, other highlights included Jaiden Venem getting her first career hat trick against Owatonna on Dec. 13. In that game the team came away with an 8-0 victory. Emma Piechowski was in the net to record the shutout.

Next, Albert Lea went on the road to face Waseca Dec. 20. Emilee Schmitt scored her first career goal on a backhand shot. Alli Dulitz setup Schmitt with a nice pass to the front of the net. Albert Lea came out on top 9-2.

The following weekend, the team faced Austin and came away with a 6-1 victory, outshooting its opponents 36-13. Katie Uthke worked hard and received a player maker award with three assists. The next day, the team traveled to Owatonna and continued its successful run with a 5-0 victory. Leading the scoring was Lucy Stay with her first career hat trick. Hannah Adams assisted on two of the goals.

In a tough game against Mankato on Jan. 3, the team came away with a 4-3 victory. Taylor Stanek led the scoring, carrying the puck from her defensive position to get three goals for a hat trick. That same day, the team continued its road trip to Fairmont and was victorious with a 5-1 score. Esther Yoon had a strong game playing both forward and defense, and was rewarded for her hard work with a goal in the second period.

In her first game back from injury, Malana Thompson scored the lone goal for Albert Lea against Rochester in a home game Jan. 9. It was a good game with action on both ends of the ice, but the home team came out on the short end of a 2-1 game.

Albert Lea hosted its home tournament Jan. 15-17 and got third place. In the first game the home team came away with a 6-2 victory over Minneapolis.  Josie Venem led the scoring with a hat trick. In the third-place game Albert Lea faced Omaha and dominated with a 3-0 victory, outshooting its opponent 36-17.

The following weekend, Albert Lea traveled to St. Paul for the Heartbreakers tournament and again finished third. In an exciting first game, the team came away with a 3-2 overtime victory over Eastview. Josie Venem scored the game winner in the overtime period. The third-place game against host St. Paul would take overtime and a shootout.  Dulitz and Jaiden Venem scored for Albert Lea in the shootout to secure the victory and third-place honors. Piechowski was solid in net facing the pressure of overtime and the shootout.

Jan. 30 was Albert Lea Hockey Day and the U12 hosted Fairmont. Albert Lea jumped out to an early lead and never slowed down, scoring eight goals and shutting down its opponents, not allowing them a single goal.

The team was set to participate as the No. 4 seed in the district tournament Saturday and today in Waseca.