Albert Lea retiree returns to work in a new trade 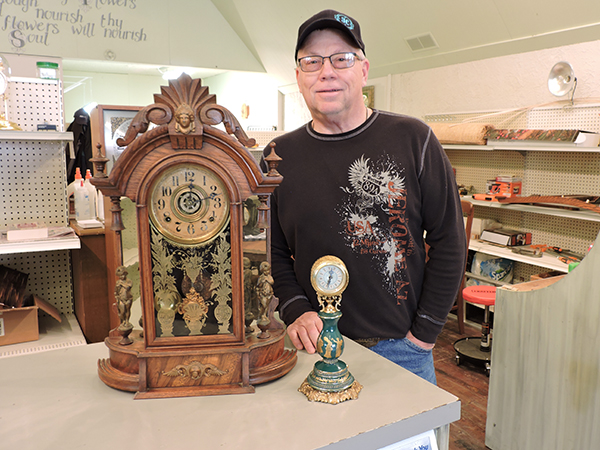 Jeff Johnson’s shop has about 100 clocks in it, including the larger clock pictured, which was originally purchased by its first owner in 1892. -Kelly Wassenberg/Albert Lea Tribune

ALDEN — When Jeff Johnson, 62, of Albert Lea retired last year, he never intended to go back to work. It turns out it was only a matter of time.

Johnson’s father, Bud, asked him if he was interested in starting a new venture with him after being offered the opportunity to buy a clock repair shop from 87-year-old Don Tesch.

According to the younger Johnson, his father had purchased a grandfather clock, and it had stopped moving sometime in the process of moving it, so he called Tesch to repair it. Tesch then asked his father if he would like to buy the business, and his father posed the idea to him.

“I guess there’s a lot of stuff I could be doing at home, but this kind of intrigued me,” Johnson said, noting that once he got started in the trade, he fell in love with it. 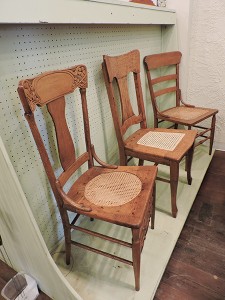 Along with repairing clocks, Johnson recanes chairs both with refabricated pieces or can do the entire process by hand. – Kelly Wassenberg/Albert Lea Tribune

He has now owned Cowboy Clocks and Caning since Aug. 1.

“It hasn’t been a long time, but it’s getting a lot of good experience,” Johnson said.

Since opening his store in Alden Aug. 1, Johnson has found there is no shortage of work in the trade. He said a lot of people come in with clocks that have not been operational for years, but their owners didn’t know where to go to get the clock repaired. Out of the 100 clocks in his shop, only about 20 are for sale. The others are waiting to be serviced.

Once he gets a clock into the shop, he tears it down and checks the pivot holes and gears for wear. Everything is cleaned with an ammoniated cleaner before being checked once more. After shining the pivots, he reassembles the movements and places them on racks he has in his shop. For a few weeks he’ll allow the movements to run to ensure there are no problems before returning the piece to its owner.

Johnson is currently booked out for about four months due to the lengthy process of repairing the movements and the long waiting list he has of clocks to repair.

In fact, his shop is only open three days a week or by appointment, but he finds himself there five days a week just to catch up on things.

“It’s satisfying,” Johnson said. “When you can take something that’s 150 years old and make it run again, that’s pretty cool, I think.”

Johnson can be found at his shop between 10 a.m. and 5 p.m. Tuesdays, Wednesdays and Thursdays and by appointments. His shop is located on Broadway in Alden next to the fire hall, and he can be reached at 507-318-0707.

Clocks can be brought into his shop, or Johnson can come out to a customer’s home and retrieve the piece. He usually removes the movements from grandfather clocks prior to bringing them into the shop, but will bring the entire unit if the case needs to be repaired as well.