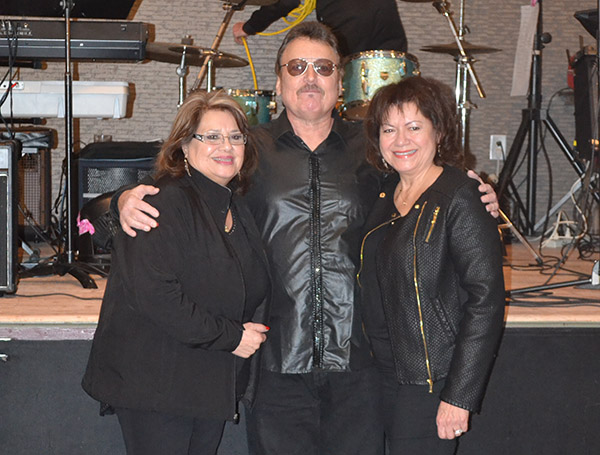 Denny Charnecki, center, stands with Irma Valens, left, and Connie Valens, sisters of Ritchie Valens, who died in a plane crash on Feb. 3, 1959. The crash claimed the lives of Valens and fellow musicians Buddy Holly and J.P. “The Big Bopper” Richardson, as well as pilot Roger Peterson. – Provided

After the sold-out Winter Dance Party earlier this month at the Surf Ballroom in Clear Lake, Denny and the DC Drifters will present a Buddy Holly Tribute this coming week at the Marion Ross Performing Arts Center.

Denny Charnecki said he has performed the show in Albert Lea before, and it was well received.

The event will include all of the songs the group played at the Surf Ballroom, plus some history from Holly’s life.

Holly, an American musician and singer-songwriter, was a major influence on later artists, including the Beatles and the Rolling Stones, to name a few.

Holly, along with other young rock ‘n’ roll stars Ritchie Valens and J.P. “The Big Bopper” Richardson, were killed in a plane crash Feb. 3, 1959, north of Clear Lake, after performing at the Surf Ballroom. It later became known as The Day the Music Died.

Holly and his band were playing on the Winter Dance Party tour across the Midwest and were accompanied by Valens and Richardson. They were taking the plane to their next performance in Moorhead.

Charnecki, who lives in Austin, said the Buddy Holly Tribute in Albert Lea will include some of the actual recordings used at the time and information on how Holly’s music got recorded.

In addition to Denny and the DC Drifters, there will be at least a handful of other musicians coming to play at the event.

“Being the young men that they were, they really had a history in rock ‘n’ roll music,” Charnecki said.

Denny and the DC Drifters have toured for decades, opening for big stars and playing backup for some of the biggest classic rock ‘n’ roll and country acts in U.S. music history.

Charnecki said the DC Drifters started in 1963 while still in school and began playing  professionally in 1966 with hits “I Know” and “Louisiana Blues.”

The group toured in places such as Florida, North Carolina, South Carolina and Nebraska and worked with popular bands over the years, including the bands for Elvis Presley and Holly.

He said over the years he has been able to become close friends with Valens and Richardson’s families and toured with some of Holly’s family.

The group received the Lifetime Achievement Award from the Midwest Country and Rock ‘n’ Roll Hall of Fame.

Info.: Tickets can be purchased at the box office