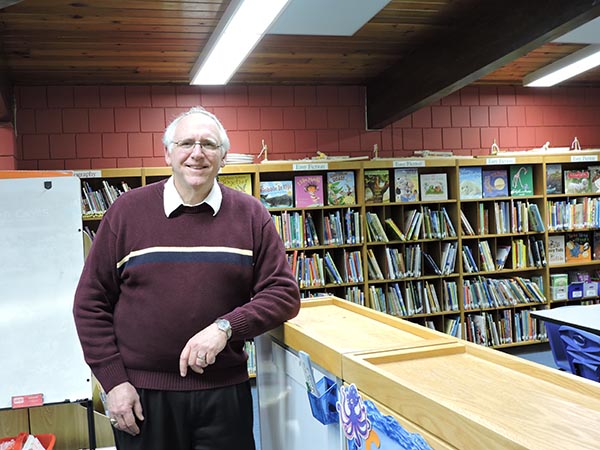 Enno Haan has been principal of Hollandale Christian School for three years, but has worked in Christian schools for over three decades. – Kelly Wassenberg/Albert Lea Tribune

HOLLANDALE — Hollandale Christian School will host an open house, present a musical and have a fundraising auction all within the next few weeks, according to school principal Enno Haan.

The open house, which will be from 6 to 8 p.m. today, will allow parents who are interested in pursuing the option of a Christian education to tour the school and meet the staff, as well as some of the parents of current students.

Those who attend the open house may notice the staging being set up in the school’s gymnasium.

The school is preparing for its presentation of the musical “The Amazing Grace Race: In His Steps … in My Shoes” on March 11. There will be two showings of the musical, at 12:30 p.m. and 7:30 p.m. The musical was written by David T. and Celeste Clydesdale and is a story about a group of runners who are running the race of life. According to a press release, “The Christian life is very much like this; the trail is full of mountains and valleys. The key to running this race successfully is to follow in Christ’s footsteps.”

Haan said the theme throughout the story is, “the good Lord, grace and forgiveness.”

He also noted that the musical is a whole school project. All 66 students in the school will participate in the musical, with the actors predominantly coming from the eighth-grade class.

The sixth- through eighth-grade band will perform prior to the performance, too.

A week later, the school will host its $ellabration fundraiser. It will begin at 5 p.m. March 18 with a light supper and silent auction. The live auction will begin at 6:30 p.m. The school hopes to raise about $50,000 during the event, which is a significant amount considering the school operates on a budget of $300,000 per year.

Haan said the approximate cost of educating a student at the school is $6,000 per year. The school board tries to keep tuition reasonable by setting it at $4,000, though they will work with parents who want to have a Christian education for their child but cannot pay the full price of tuition. This event helps offset the difference.

Haan noted they are still taking donations for the auctions, but they already have a variety of items, ranging from Barbie doll clothes to a 40-inch television. Don’t expect a bargain though. Haan said he’s seen a loaf of raisin bread go for $200 as alumni, community members and families of current students show their support by helping to ensure the school continues to thrive.

The support is vital to the school.

“We are not a parochial school,” Haan said. “We have children from 18 different churches coming here.

As a result, the school is not subsidized by a church.

“I feel we’re a diamond in the rough,” he said. “We’re this quaint little school out here in Hollandale, but it’s a safe little place where children can thrive.”

And he’s positive that the school will continue to thrive as well.

“We got here by the grace of our good Lord and he always provides,” he said.