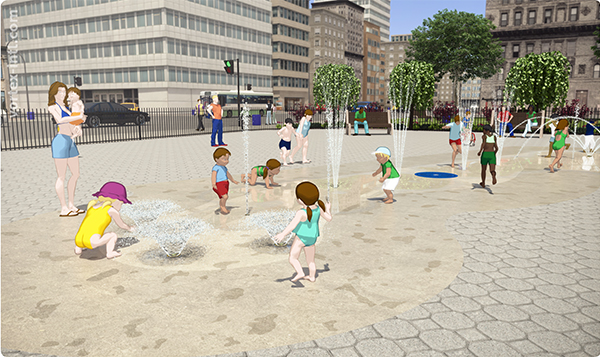 This rendering shows what a potential splash pad at the corner of Broadway and Fountain Street could look like. Splash pads feature jets with water. Jets would be turned on by pressing a button.

The Albert Lea City Council gave the green light for a group of volunteers to begin fundraising for the project, proposed to be across the street from Fountain Lake Park and north of the North Broadway parking lot.

“This project will bridge Albert Lea’s greatest assets, our downtown and Fountain Lake,” said Crystal Miller, one of the leaders of the group. “Working together for something great will show how proud we all are of our beautiful city.”

Miller, along with community members Sarah Stultz and Susie Petersen, presented information about the splash pad and why they think it’s a good project for the community.

Miller said the project is expected to cost between $120,000 and $130,000, and expressed optimism based on her past fundraising efforts for downtown flower baskets. She said through hard work and through the generosity of the community, the group will be able to raise the money.

The project won’t begin until fundraising is complete.

According to Albert Lea Parks and Recreation Director Jay Hutchison, if fundraising can be completed soon enough, the splash pad could be constructed by early June.

Donations can be given to the Albert Lea-Freeborn County Chamber Foundation, a 501(c)3 nonprofit account, and would be tax deductible.

Miller said local businesses and organizations have already expressed interest in donating services or dollars towards the project.

She said the project will tie together multiple assets of the community.

Miller said the splash pad would feature a central command system that would regulate water use to increase efficiency.

She said the splash pad would provide Albert Lea additional recreation and tourism.

Stultz said as a mother of two children, she was excited about the potential it has for the community, and as a member of a young family, she thought it would be nice to have a place to entertain children at no charge. She said with proper safety measures, a splash pad could be an asset to Albert Lea and get more children outside.

Petersen, executive director of the Albert Lea Convention and Visitors Bureau, showed pictures of splash pads in other states and the success the communities have seen.

Petersen said it was going to attract both people in the community and tourists.

“We have a beautiful community, and this is just an added attraction,” she said.

She referenced the success of the Albert Lea Fire Department’s pop-up splash pad last summer at Wind Down Wednesday.

She said a splash pad represents a place for all generations to have social interaction. 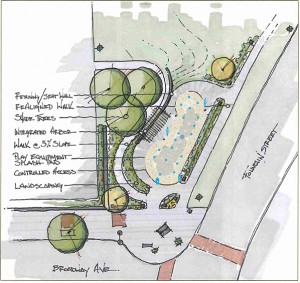 This rendering shows the location for a potential splash pad at the intersection of Broadway and Fountain Street. A barrier would be put in place to prevent children from running into the street.

Public dialogue is planned throughout the fundraising process.

Third Ward Councilor George Marin expressed support for the project but concern over conducting the project when water rates are increasing for residents.

Albert Lea City Manager Chad Adams said the concept includes a barrier to prevent children from wandering into the street.

Miller is the publisher of the Tribune, and Stultz is the managing editor.