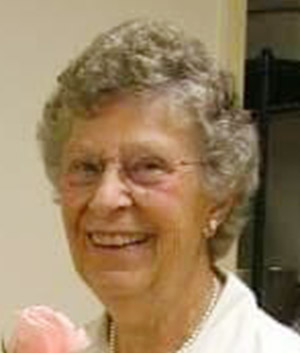 Iris W. (Marchant) was born May 27, 1924, to Winfield and Edith (Mander) Marchant in Cumberland County, Virginia. She attended and graduated from John Randall High School in Cumberland County. She later received her secretarial degree. She began her work as a secretary at the shipyards in Virginia. She was united in marriage to Harvey Bell on Feb. 3, 1945, in Newport News, Virginia. The couple moved the following year to Hartland, a place they have always called home. Together, the couple owned and operated the Hartland Greenhouse.  Iris was a member of Hartland Evangelical Lutheran Church, where she was active in ladies aid and the Ruth circle. She was a member of the Albert Lea Garden Club, Hartland Birthday Club, Mother’s Club and the American Legion Auxiliary.

Flowers and gardening were not only her family’s business, but also her passion and joy. She was a people person, who loved to have conversation over a cup of coffee and a cookie. She always put others before herself, as hospitality was an important characteristic in Iris’ life. She was a very kind, witty and gracious person that made everyone feel welcomed and important.  She will be deeply missed.

She is preceded in death by her parents; spouse, Harvey; son, David; son-in-law, Al Miller; and sisters Agnes Vang and Rowena Lute.