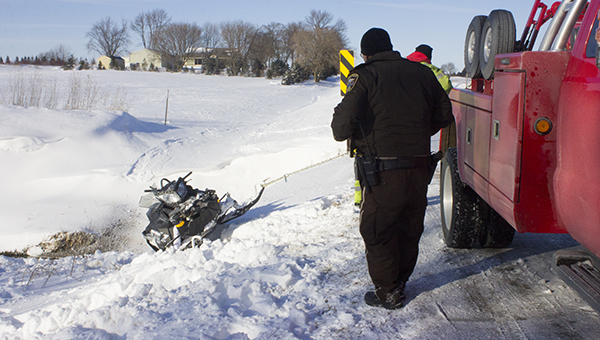 Two snowmobiles driven by Adam Joseph Sieren, 35, of West Des Moines and Michael Allen Firkins, 34, of Des Moines were traveling south through a ditch between 150th and 160th streets on 810th Avenue, approximately a mile northeast of Glenville, when they crashed into a ravine  they didn’t see, according to Freeborn County Sheriff’s Office Sgt. Keith Bolinger. The ravine was approximately 10 feet below the road surface.

According to Sheriff Kurt Freitag, it appeared the two were not ejected from their snowmobiles.

Sieren and Firkins were reportedly not familiar with the area.

Bolinger said weather was not a factor in the crash.

Both snowmobiles were towed and reportedly sustained substantial damage.