Wagner jumper leads Gophers in upset over No. 5 Buckeyes 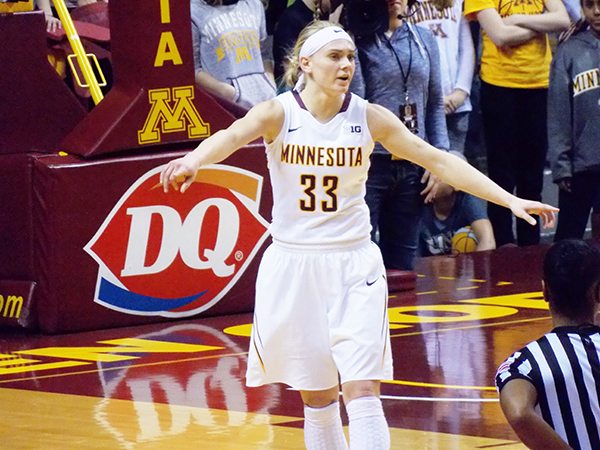 MINNEAPOLIS — Rachel Banham put on another dazzling show in her final game at Williams Arena and Carlie Wagner made sure her backcourt buddy went out a winner.

Banham poured in 35 points and Wagner scored with 0.8 seconds left in overtime to lift Minnesota to a 90-88 victory over No. 5 Ohio State on Wednesday night. It was the Gophers’ first top-five victory in 11 years.

Wagner scored 26 points, the last on a pullup from the baseline after Banham had fouled out, and the Golden Gophers (19-9, 11-6 Big Ten) picked up a much-needed signature win to strengthen their case for an NCAA tournament bid.

‘’It was stressful,’’ Banham said. ‘’It’s hard watching from the bench when you want to be in. I felt like we had control in the overtime and I knew Carlie could make that shot. It was a different view sitting there and having to watch it. But I’m glad that we got it.’’

Minnesota thought it had the game won when Jessie Edwards scored on a put-back with 0.5 seconds left in regulation, but Alexa Hart scored on a backdoor lob to force overtime for Ohio State (23-5, 15-2).

Shayla Cooper had 25 points and 11 rebounds and Hart finished with 14 points and 17 boards for the Buckeyes. Kelsey Mitchell scored 21 points on 6-for-24 shooting, but she couldn’t get a shot off on the last possession and Ohio State lost for the first time in 12 games to miss a chance to clinch a share of the Big Ten title.

The Gophers were down 11 early in the third quarter and five with three minutes to play in regulation. But the sophomore Wagner scored 11 points in the final seven minutes of the game. Her big shot at the end helped atone for an ugly turnover late in regulation that gave Ohio State new life.

‘’I just feel like I have a responsibility to step up when Rachel’s out, especially in a tight situation like that,’’ Wagner said. ‘’I just had to be aggressive and get to the basket. I got angry and wanted to get in there.’’

The Buckeyes entered the game second in the nation in scoring offense at 87.3 points per game, fourth in field goal percentage (48.9) and winners of 19 of their last 20 games. But they shot 35 percent, went 1 for 11 from 3-point range and managed just 34 points in the first half. Ameryst Alston missed seven of her nine shots and Mitchell missed 13 of her first 14 shots.

‘’We’ve had great ball movement lately and we didn’t have any of that tonight,’’ Ohio State coach Kevin McGuff said. ‘’It was a real struggle for us.’’

And as long as it’s close, the Gophers have a chance thanks to Banham. The Big Ten’s career scoring leader was honored before the game on Senior Night for a stellar career that has seen her comeback from a torn ACL in her right knee to resume her status as one of the best scorers in the country. She had 60 points in an overtime win over Northwestern on Feb. 7 and 52 in a loss to Michigan State on Sunday, earning her the Twitter admiration of Kobe Bryant.

One reason the Buckeyes just looked a little off in the first half? Their bus was late to the arena because it was stuck in traffic driving over from the hotel.

‘’We had to rush and everyone was kind of not in their game-ready routine,’’ Cooper said. ‘’I’m not blaming it on that. At the end of the day, when the tipoff goes you have to be ready to go no matter what. We should’ve won.’’

Minnesota: Banham broke her own Minnesota season scoring record (previously 750 in 2013-14) and has 777 this year. …The 10 3-pointers pushed the Gophers to 156 on the season, a new conference-only Big Ten record. Ohio State held the previous record with 151 last season. … Edwards had eight of her 12 rebounds on the offensive glass and Joanna Hedstrom added 10 boards.