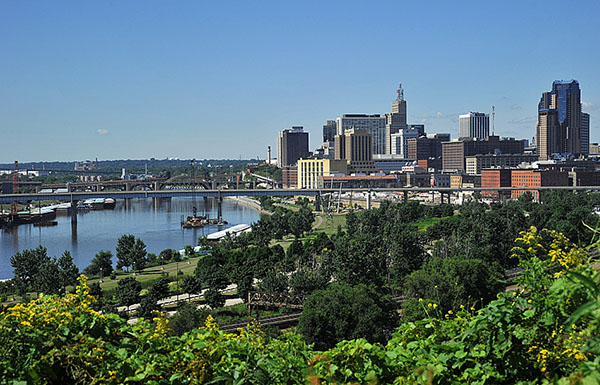 New census estimates show there were 185,669 more Minnesota residents last year than in 2010. Eighty-eight percent of those people live in the seven-county metro area.

Yoga teacher Jill Zimmerman, 52, is among them.

“I moved here to live near family and just start a new life,” said Zimmerman, who came to Minneapolis from Brooklyn six years ago — just in time to be counted in the 2010 census. “It’s a small city and it’s not crazy like New York. But I miss the craziness of New York a little bit. I miss the excitement.”

But Zimmerman is in the minority. Minnesota is actually losing population to other states. About 4,200 more people moved out of the Twin Cities than moved in. Immigration from abroad more than made up for that, though. Fifty-eight thousand people born in other countries moved in over the half-decade span.

But even new immigrants account for just a fraction of the region’s growth. Two-thirds of it is from native Minnesotans.

As modest as the Twin Cities’ growth is by comparison, the region needs to be ready to handle more people, said Adam Duininck, chair of the Metropolitan Council, a planning agency. He said aging roads, bridges, pipes and power lines will eventually reach a breaking point.

“The growth is going to put a tremendous amount of burden on things like our energy use, like our transportation needs, like our water and wastewater infrastructure,” he said.

Duininck said the Twin Cities’ population is growing significantly faster than other Midwestern metropolises, including St. Louis, Chicago and Cincinnati.

The Met Council is projecting the current pace of population growth will continue, with another three quarters of a million people calling the Twin Cities home by 2040.