Funeral services for Darrol Sponberg will be at 11 a.m. Tuesday at Vista Lutheran Church in rural New Richland. The Rev. Brian Gegel will officiate. Visitation will be from 3 to 7 p.m., with family present from 4 to 7 p.m. Monday. A family prayer service will be at 7 p.m. Monday at the Bonnerup-Friedrich Funeral chapel in New Richland. Visitation will take place again one hour prior to the service at church. Interment will be in Vista Lutheran Cemetery.

Darrol Herbert Sponberg died Friday, March 25, 2016, at the New Richland Care Center, where he was loved and cared for by a wonderful staff. He was 83. 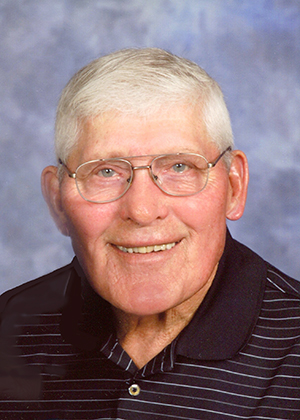 Darrol was born Sept. 23, 1932, on the Sponberg farm, homesteaded by his great-grandfather in 1871, to Herbert and Lucille (Olson) Sponberg. He attended country school and New Richland High School. He graduated from Tucson High School in Tucson, Arizona, where the family moved to because of his sister’s health. Later, he was made an honorary member of the New Richland class of 1950.

He attended college at the University of Minnesota farm campus for only a short time because his parents were injured in a traffic accident and he was needed to help on the farm. He enlisted in the United States Army in 1953 and served in Korea toward the end of the war.

Darrol married Pauline “Polly” Knutson March 19, 1955, at Oakland Lutheran Church. That year, they started farming and kept the century farm going for 60 years. He was a lifelong member of Vista Lutheran Church, where he was baptized and confirmed. He also was a member of the Lions Club, American Legion and Veterans of Foreign Wars. When Darrol was a young man he enjoyed playing baseball, bowling, golfing and riding a snowmobile. He obtained his private pilot’s license. He served on the Norwest Bank board and Sun Rich Waxy Corn board for several years. Many young men got their first job working for Darrol, driving sweetcorn trucks and hauling grain.

He is survived by his wife of 61 years, Polly, of New Richland; son, David Sponberg (Lee); daughter, Paula Priebe and her children Madison, Jackson and Allison; daughter, Karla Christopherson, and Doug Christopherson and their girls Abby and Olivia; brother, Adryn (Donna) Sponberg of Fargo, North Dakota; and sister, Jana Lee Sponberg of Alexandria, Virginia; as well as many other loving family and friends.