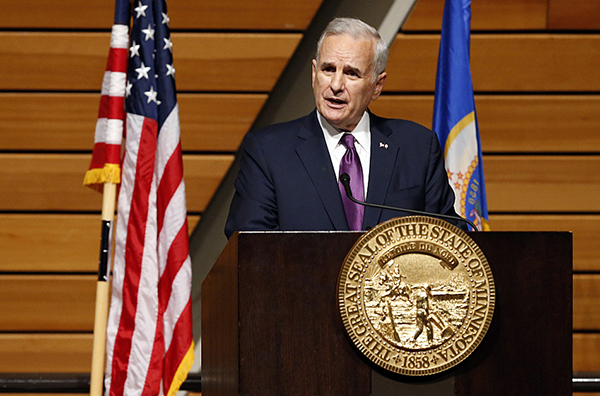 Gov. Mark Dayton delivers his State of the State address Wednesday at the University of Minnesota in Minneapolis. – Jim Mone/For MPR News

With the Minnesota Capitol undergoing a massive restoration, Gov. Mark Dayton went to the University of Minnesota Wednesday night to deliver his sixth State of the State address.

In a speech that stuck to mostly familiar themes, Dayton said his No. 1 priority for the 2016 session is protecting the fiscal integrity of state government.

When Dayton took office five years ago, he faced a $6 billion budget deficit. Now, there’s a $900 million surplus. He said the state’s fiscal ship has been righted, and he doesn’t want see its stability threatened by expensive tax cuts.

“Some people are proposing permanent tax cuts, which would put our state’s budget, once again, on a fiscal precipice. They say ‘give it all back’ to the taxpayers. But that slogan is based upon a wrong premise and a wrong conclusion,” he said.

Dayton said he’ll release a supplemental budget plan next week with some modest spending proposals and some targeted tax relief for middle-class families. Specifically, he wants an increase in the child care tax credit.

Dayton said there are still too many Minnesotans who are suffering financially, like laid-off Iron Range steelworkers. Dayton called on lawmakers to quickly pass a 26-week extension of unemployment benefits. He scolded House Republicans for tying the issue to a tax break for businesses.

“I pledge to work with you in this session to provide meaningful unemployment tax reductions for Minnesota businesses. But that change deserves proper review through your established committees and procedures,” he said. “To hold $29 million of desperately needed unemployment benefits hostage to $272 million in fund cuts is unnecessary. And it’s cruel.”

Dayton repeated his call for lawmakers to also address racial economic disparities. He said the state’s income gaps for minority groups are unacceptable.

Dayton also took on racial intolerance. He introduced a Coon Rapids woman in attendance who was physically attacked in a restaurant for not speaking English, and described his recent visit to a vandalized mosque.

“I urge all of us, as leaders of this state, to stand up and speak out together in denouncing any acts of racial or religious intolerance. Minnesota must be better than this.”

Dayton also highlighted the need for a large bonding bill, including many water quality projects, and stressed the need for a long-range transportation funding measure. Dayton said the gas tax increase he pushed unsuccessfully last year would have provided “real money.” He said he’s waiting for lawmakers to offer an alternative that does the same.

“No smoke and mirrors. No double-counting existing revenues. No counting non-existent revenues. This is about construction projects, not campaign posters,” he said. “And it’s too urgent to be left for another year.”

Republican House Speaker Kurt Daudt was complimentary of the tone of the governor’s speech, while taking issue with some of its content. On transportation, Daudt said he shares the governor’s goal to find a solution.

“We don’t agree on the way to pay for it. We believe the existing sources revenue and the existing surplus should be used. He’s proposing some new revenue,” he said. “But I think we can work through those things if we really focus on solving the problem.”

Daudt said he was open to discussing the unemployment issue. But he said he was disappointed that the governor didn’t talk about trying to expand the types of mining in northeastern Minnesota.

“We deeply care about the fiscal stability of the state’s budget. We’re going to be back here a year from now with a new Legislature, putting a new two-year budget together. We don’t want to make decisions this year that put the state back into crisis management,” Bakk said. “So, I appreciate the fact that he indicated that was his No. 1 priority.”

Bakk said the Senate is poised to pass an unemployment extension measure Thursday that does not include a tax break for businesses. He said he’s hopeful that the House will do that, too.