Memorial services for Duane D Hausman will be at 1:30 p.m. Friday at Zion Lutheran Church in Albert Lea. The Rev. Robert Stohlmann will officiate. Visitation will take place one hour prior to the service at the church. Military honors will be accorded by the Freeborn County veterans organizations. 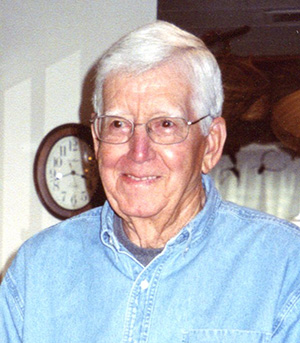 Duane passed away quietly in his sleep Tuesday, March 8, 2016.

He was born in Parkers Prairie on May 26, 1926, to Fred and Ann (Gaedke) Hausman. Upon enlisting, Duane served in the Navy as a shipfitter. Duane served on the USS Lowry, a destroyer in World War II. The ship was in service all the way to the end of the war and survived many enemy attacks. Duane was able to witness the final days of World War II in Tokyo Bay.

Duane worked as a mechanic at Motor Inn for many years and then became owner and manager of Northside Mobil Station and Mobil Bulk Oil. Later he worked for Jim and Dude’s Plumbing. He married Ferne Bolinger in 1950. She passed away in 1971.

On April 7, 1973, he was united in marriage to Helen Wacholz. Duane was an active member of Zion Lutheran Church and served on the council, as an usher and he especially loved singing in the choir. He was a talented man, which was matched equally by his humbleness.  Duane earned a pilot’s license after his military service and thoroughly enjoyed time in the air, particularly noting the quiet and beauty of a glider.

Upon retirement, woodworking became a main interest and many special things were created and gifted to others; everything from birds and fish to faces, characters and relief portraits.

Duane was a kind, generous person who was always willing to go the extra mile for his fellow human beings. His loving heart and beautiful, gentle spirit will be deeply missed. All who had the good fortune to know him have been greatly blessed.

His request was for memorials be directed to the charity of the donor’s choice.