Funeral services for Ella Yanke Nelson will be at 2 p.m. Saturday at Ascension Lutheran Church in Albert Lea. The Rev. Mark Boorsma will officiate. Visitation will be one hour prior to the service at the church. Interment will take place at First Lutheran Cemetery in Ellendale. 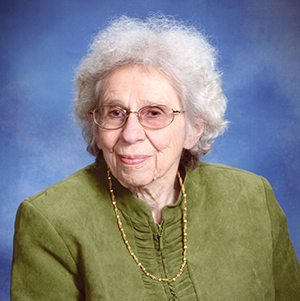 Ella worked as the office manager’s secretary at Wilson & Co. in Albert Lea. On April 24, 1946, she was united in marriage to Benjamin Yanke at First Lutheran Church in Ellendale. Bennie passed away in 1964. She was employed by Farmer’s Milling and Elevator in Ellendale until 1966 and as the superintendent’s secretary at Ellendale-Geneva School until her retirement in 1988.

Ella married Curtis Nelson on Oct. 24, 1987, and moved to Lake Mills. She was employed at Osbeck Insurance and Senior Resources until 2003. Her husband, Curtis, passed away in 1998. After his death she moved back to Albert Lea. She was a member of Ascension Lutheran Church, where she was a part of Esther circle and Women of the Evangelical Lutheran Church Association. She was a member of Naeve Hospital Auxiliary, previously she served on the board as a treasurer. In her free time she enjoyed volunteering, golfing, bowling, traveling and playing cards in her card club.

Memorials are preferred to the Alzheimer’s Association.