Funeral services for Florence L. Brzezenski of Albert Lea will be at 10 a.m. Saturday at Bonnerup Funeral Service in Albert Lea. The Rev. Christopher Martin will officiate. Interment will be in Hillcrest Cemetery. Friends may call one hour before services at the funeral home. 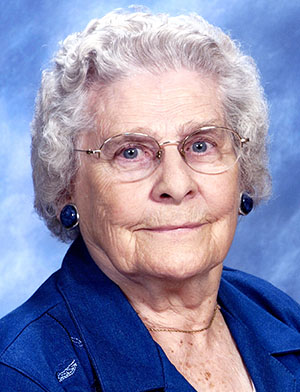 She was born Aug. 31, 1920, in Erie, Pennsylvania, the daughter of Chris and Johanna (Bach) Bonnerup.

Throughout her life she had worked at Loyola Dental School in Chicago, for the Los Angeles Fire Department and then as a dental assistant and typist for the U.S. Government Veteran’s Administration in Pittsburgh from 1949 to 1981. In her later years she moved to the Albert Lea area to be near her family.

Florence enjoyed bowling and traveling, which was highlighted by her trip to Denmark to visit relatives.

She volunteered at the Senior Center and passionately gave to the American Red Cross blood drive.

She is survived by brother-in-law, Kenny Gayken, and sisters-in-law Velma and Maxine Bonnerup, all of Albert Lea.