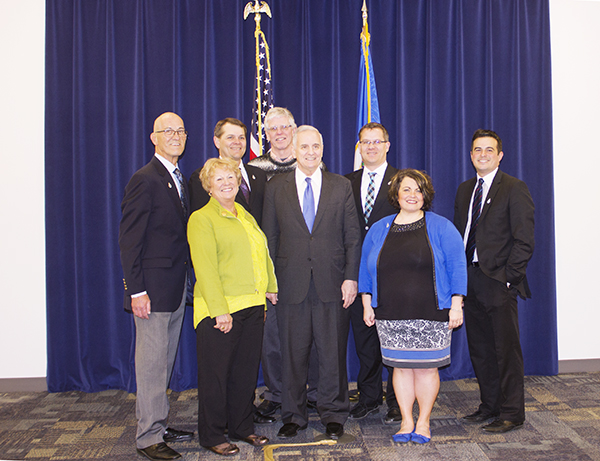 Albert Lea leaders meet with representatives in the Capitol

“I am just so impressed with the leadership,” Dayton said. 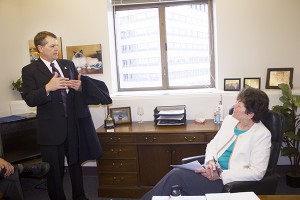 Dayton made the comment at a small gathering of Albert Lea city leaders at the Capitol. He said he was impressed with the city’s efforts to renovate its downtown district, and with local government agencies in their efforts to increase water quality in area lakes.

Dayton said the city and Freeborn County’s Stables area bonding request to extend sanitary sewer and water to the Stables Area was placed on his $1.4 billion bonding request because of its importance.

He said he has heard about the quality of work the city of Albert Lea has done from the Lessard-Sams Outdoor Heritage Council, and added that city office holders have the toughest political jobs, because constituents oftentimes know where they live.

Rasmussen thanked Dayton for his proposal for $21.5 million for LGA funding in his supplemental budget released Tuesday, and added that LGA funding helps bring sustainable services for Greater Minnesotans.

Rasmussen and Adams emphasized the city is interested in requesting $3.5 million in the 2016 legislative session for the first phase of Blazing Star Landing, which includes moving Front Street north to make way for lakefront development and preliminary preparation work north of the railroad.

Bennett said, while she supports an increase in LGA funding, she has to weigh an increase with other important funding requests and issues expressed by constituents, such as eliminating taxes on military benefits pensions and Social Security.

Sparks said the subjects discussed by local leaders are his top priorities, and added that their visit was productive and informative.

“It is so important to have those relationships with local leaders,” he said. “Together we have been very successful in our efforts, resulting in great outcomes for Albert Lea and Freeborn County.”

“We appreciate the time and service that Sen. Sparks and Rep. Bennett are providing to the Albert Lea community, and for their support and advocacy of our local priorities,” he said.

Executive Director of Greater Minnesota Partnership Dan Dorman presented a proposal for $15 million in appropriations in fiscal year 2017 and $30 million in fiscal year 2018 for a workforce housing tax credit Thursday morning in a session between coalition members from throughout the state and staff at Flaherty & Hood Law Offices, near the Capitol.

Coalition members were updated on the coalition’s legislative priorities during this year’s legislative session, such as transportation, broadband and Dayton’s proposed funding for clean water infrastructure.

Adams said he enjoyed the trip.

“We were pleased with the discussions we had with Gov. Dayton and appreciate the time he set aside to discuss our local priorities that we believe will also benefit the state,” he said.