John Navarro Jr. passed away in peace surrounded by family and friends on Tuesday, Feb. 23, 2016, at St. Marys Hospital in Rochester. He was 48.

John Jr. was born Oct. 10, 1967, in St. Paul and attended Albert Lea High School, where he participated in many sports, such as wrestling and football. He graduated from Riverland Community College in 1994. He was well known in high school and made many friends, who he stayed in contact with over the years. Affectionately known as “Junior” to family and friends, he was a man known for his adoration of his children and grandchildren. His children had a special bond with their dad, he was always there for them and they knew they could call him anytime. They will greatly miss the love and support that only he had to offer. Junior was larger than life, he loved to laugh, have a good time and surrounded himself with family and friends. He loved music and especially singing karaoke. 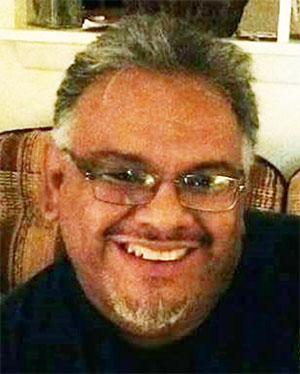 He was preceded in death by his grandparents and son-in-law, Jerome Hall Jr.

His memorial/celebration of life service will be from 5 to 9 p.m. Friday at the Fairlane Building on the Freeborn County Fairgrounds. An opportunity for all his family and friends to share stories will begin at 6:30 p.m. Ron and Steve Unplugged are donating their time and will be performing from 7:30 to 9 p.m.