A memorial service for Mike Ell will be at 2 p.m. Monday at Grace Lutheran Church in Albert Lea. Mike Ell passed away Friday, March 18, 2016, after a 19-month battle with cancer. He was 39. 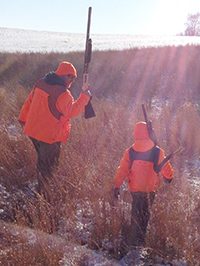 Mike was born Oct. 27, 1976, in Albert Lea to John and Gloria (Balfe) Ell. He was a 1995 graduate of Albert Lea High School. He continued his education at Dunwoody Institute for Auto Body Repair. On March 3, 2001, he was united in marriage to Sara Rothmeier at Grace Lutheran Church in Albert Lea.

Mike worked at different auto body shops in the Clarks Grove and New Market areas. Mike also did auto body work and paint jobs from his own garage. His dream was to operate his own auto body shop. He was always willing to help a neighbor repairing cars, boats, snowmobiles and dirt bikes.

Mike enjoyed taking his son, Casey, duck and pheasant hunting. They golfed together and Casey was really pretty good. Mike was a youth hockey coach, a serious Wild fan and enjoyed a beer and outdoor fire with the neighbors in New Market.

Mike was preceded in death by his father, John Ell; uncles George and Paul Ell; and grandparents Monte and Anges Ell and Donald and Muriel Balfe.

Neighbors, friends and family will celebrate Mike’s life with a benefit and going away celebration May 14 at End Zone, 10491 E. 260th St., Elko, MN.

In lieu of flowers, a donation to the family to help with medical expenses would be greatly appreciated. See website www.gofundme.com/a7scmx84.

Mike will be sadly missed by all who knew him. God bless you, Mikey.