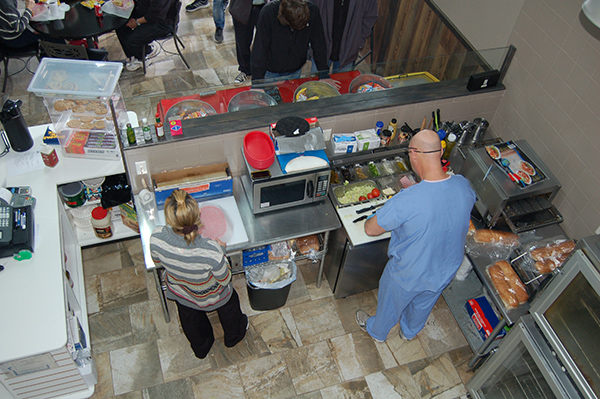 Shelly and Tom Simonson are the owner/operators of Roundtable Deli in Alden. – Shelly Zeller/Alden Advance

“We opened as soon as the health inspector was finished at 11:15 a.m. last Friday, and by 12:30 p.m. we were out of our homemade bread,” said Roundtable Deli owner Tom Simonson.

Simonson and his wife, Shelly, began what they call a “mom and pop” shop nine years ago in Kiester. The couple opened Tanks and Tummies February 2009, and decided it was time to move to a better location, and are now serving Alden and its surrounding communities.

“Years ago I wanted to buy a sandwich chain, until I realized the regulations and I wanted something that I could call my own,” Tom Simonson said.

After moving to Kiester, the couple knew a full-fledged restaurant would not work, so decided on a coffee shop.

“It was our way to give back to the community,” they said.

Seven years later, almost to the day, the couple has moved their talents from Kiester to Alden.

“There are so many positives about being here in Alden,” said the Simonsons. “Not only is it located close to the interstate and between Wells and Albert Lea for good traffic, but the community has a great school district and there are many other successful businesses in Alden. We believe this will be a perfect location for us.”

The couple is hoping customers will be intrigued to not only eat locally, but eat fresh.

Although known in the area for its sub sandwiches, Roundtable Deli offers more than just sandwiches to its customers.

“I encourage consumers to put as much as they can on their sandwiches,” Tom Simonson said. “We make them to order and want everyone to be satisfied.”

The couple said if there are bigger orders, or customers are in a hurry, they want to utilize technology.

“It seems like everyone texts,” he said. “So why not have the option to text in orders? It works well if students are in a hurry, then it’s ready for them when they walk in the door.”

Open from 10:30 a.m. to 6:30 p.m. Monday through Friday, Tom Simonson said people are welcome to stop in earlier for coffee or breakfast.

“When I’m here, even early when making bread, I will serve customers, regardless of the time,” he said. “The door is always open.”

According to the Simonsons, they are really looking forward to meeting new faces.

“This is a family community and lots of young families,” they said. “We look forward to getting to know everybody.”

Roundtable Deli is located on Alden’s Broadway Avenue, and has seating for 24 people as well as  space availability for private gatherings.