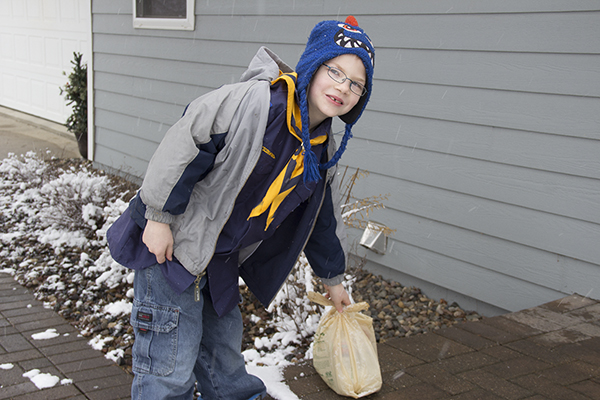 The 2016 Scouting for Food event kicked off Saturday morning at First Presbyterian Church in Albert Lea.

Scouting for Food is a local effort of the larger Boy Scouts of America’s National Good Turn. During Scouting for Food, Cub Scouts and Boy Scouts split into groups and collect food donations left on the doorsteps of city residents while earning badges and logging volunteer hours for their respective troops. This year Troops 77, 105 and 7 participated, as well as Packs 105 and 7.

Last year, Scouting for Food collected over 4,200 pounds of food for local food shelves and $450 in cash donations. The goal for 2016 was to meet and exceed those numbers. This year the drive collected 3,300 pounds of food, falling short of the projected goal.

The donations collected are split between The Salvation Army food shelf and Ecumenical Food Pantry. Each facility serves over 200 households per month. Food donations for the event are matched by Channel One as part of the Minnesota FoodShare March campaign and go toward assisting families in need.

Organizer Gina Wadding has been leading the Scouting for Food effort in Albert Lea for the last three years. She said she is excited to do it, and said teaching children to give back is very important to her.

Connor Ravlin of Boy Scouts Troop 7 said his favorite part of the Scouting for Food event is knowing they are “helping lots of people that need the food really bad.”

Levi Griggs of Cub Scouts Pack 105 said this is his second year participating in the event, and his favorite part is the end, when the Pack is treated to Godfather’s Pizza after a busy afternoon of collecting food.

Donations of nonperishable food items are accepted year round at The Salvation Army and Ecumenical Food Pantry. Some of the items needed are: