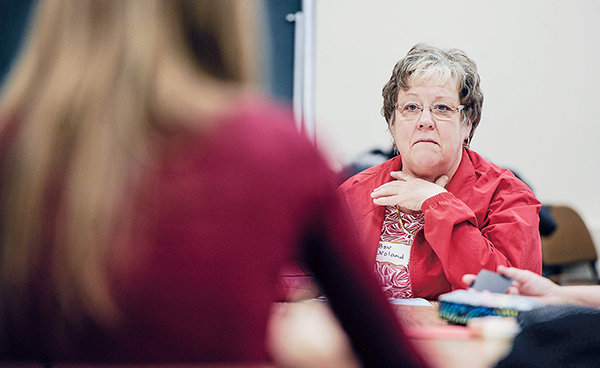 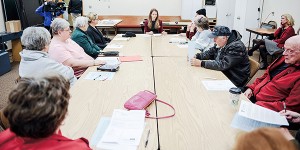 Seniors were able to share their stories through discussion and some chose to record them on videos that Franken’s staff will share with the senator’s colleagues and put on his website and social media sites.

Carolann Thompson said her prescription costs are “exuberantly high,” and just one bottle of insulin can cost $300 — she uses six bottles per month.

“It’s very expensive,” she said. “You have to cut back on a lot of things, (like) groceries and Christmas presents for my grandkids.”

She attended the discussion because she hopes to put an end to “the donut hole.” That refers to the coverage gap in most medicare prescription drug plans that have a temporary limit on what the drug plan will cover for drugs. Once a certain amount is spent, people have to pay additional drug costs out of pocket, according to www.medicare.gov.

“I’ve had to switch a lot of my medications because I couldn’t afford them,” Thompson said.

Others mentioned some of their friends go to foreign countries such as Mexico for a regular checkup and drugs because it’s a lot cheaper there. Some have also switched to generic drugs from name-brands, but they aren’t always less expensive and are often discouraged by doctors.

Another issue is preferred pharmacies from insurance companies. One man said his wife had to go to a pharmacy in the Twin Cities to get her medication because it’s what the insurance company preferred.

In a video message, Franken said he has heard too many stories of Minnesotans who have to choose between their medications and other basic necessities, causing some Minnesotans to go without medications altogether.

“Armed with your stories, I plan to press my colleagues for action on this important issue and get the word out that we can no longer ignore it,” Franken said.

Samantha Mills, Franken’s health and human services legislative aide, said it’s important for seniors to have the opportunity to share what’s happening to them.

“The reason that we’re doing this now is just to raise awareness about the issue and provide a space for seniors to share their experiences and their stories,” Mills said. “Sen. Franken has heard all over the state from countless Minnesotans that the price of prescription drugs is forcing them to make decisions that they shouldn’t have to — from their well-being, housing to food.”

• Average annual cost of therapy for one prescription drug: $11,341