Two Albert Lea residents were injured Wednesday morning after a two-vehicle crash at the intersection of Minnesota Highway 13 and Fountain Street. 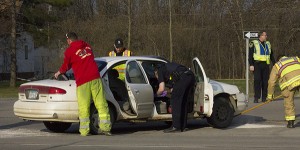 Storvick, who was driving a 2014 Honda Civic, was attempting to turn south onto Highway 13 and reportedly struck the vehicle because she did not see it.

The crash was reported at about 8 a.m.

Alcohol was reportedly not a factor.