9 inducted into ALHS Wall of Inspiration 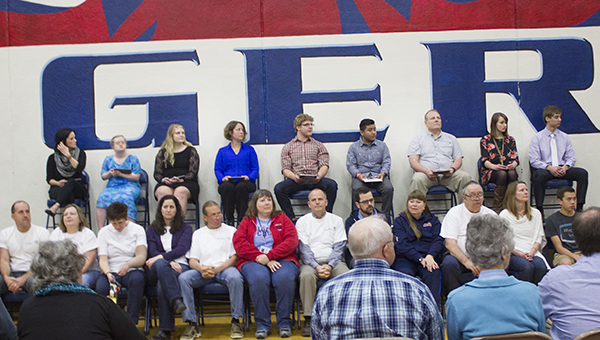 The ceremony was attended by high school students as well as friends and family of the inductees. 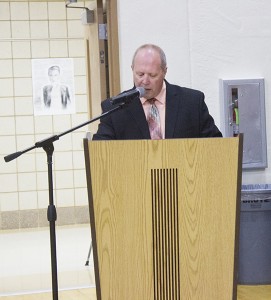 The Wall of Inspiration was created in 2004 by the Kuphal family in honor of Josh Kuphal, a 2002 Albert Lea High School graduate who passed away from spina bifida.

There are now 102 inductees on the wall, which is in its 12th year.

The Wall, which is located in the high school commons, was originally meant to honor those who inspired Josh Kuphal. The tradition continued and is full of students, staff and alumni who were nominated for being inspirational people.

Brian Kuphal, Josh Kuphal’s father, spoke at the ceremony and thanked everyone for their support.

“Every one of us inspires someone,” he said.

Collins is a special education teacher. He and his wife, Theresa, have four children: Christina, Michael, Dillon and Riley. He has been at the high school since 2006 and received his degree from Black Hills State University. He has been teaching for 19 years.

Collins enjoys hunting, watching baseball and traveling with his wife.

He said he is inspired by students and staff at the high school, especially the students who are unaware of the challenges they will face.

Outside of school, she volunteers at Good Samaritan Society of Albert Lea and sits on the Albert Lea School Board as a student member.

She said she is inspired by people who overcome obstacles.

Her future plans include being a child psychiatrist.

His hobbies include woodworking, reading and lifting.

Palmer is inspired by people who have overcome difficulties and armed forces veterans and current service members.

His future plans include going to college and getting a four-year degree.

Peralta, a senior, is involved in student council and link crew.

Outside of school, he babysits.

His hobbies include watching horror movies, singing alone, reading, drawing and wondering about the meaning of life.

Peralta is inspired by acts of kindness.

His future plans include getting a Ph.D. in counseling psychology.

Outside of school, she is involved in church council, teaching Sunday school, vacation Bible school and is employed at Sanderson Auto.

Her hobbies include painting, reading, fishing, hunting, boating and being with friends and family.

Sanderson is inspired by friends, family and faith.

Her future plans include attending Iowa State University to get a business management degree and then attending a graduate school for hospital administration.

Schumann is a guidance office secretary.

She and her husband, Anthony, have one daughter, Layla. She has been at the high school for five years and grew up in West St. Paul.

She said she is inspired by family members.

Thompson, a senior, is involved in baseball, basketball and National Honor Society.

His hobbies include baseball, basketball, competing and spending time with friends and family.

He said he is inspired by his parents and competition.

Outside of school he is in club baseball, Legion baseball, St. Theodore Catholic Church and helps on the farm.

His future plans include attending South Dakota State University to major in biology and play baseball.

Thompson, a student, helps with recycling at the high school.

Outside of school, she is involved in The Arc of Freeborn County, Family Focus and First Baptist Church in Clarks Grove.

Her hobbies include drawing, music, volleyball and bowling.

Thompson said she is inspired by God, her family, friends and teachers.

Her future plans include going to college and getting a job.

Vogt is a special education teacher. She is married and has two daughters, Megan and Marissa.

Vogt, who graduated from Albert Lea High School and Augustana University, is inspired by her family, friends, faith and students.

Her hobbies include going for walks, gardening, painting or staining furniture, and being with family and friends.