A new chapter on the field 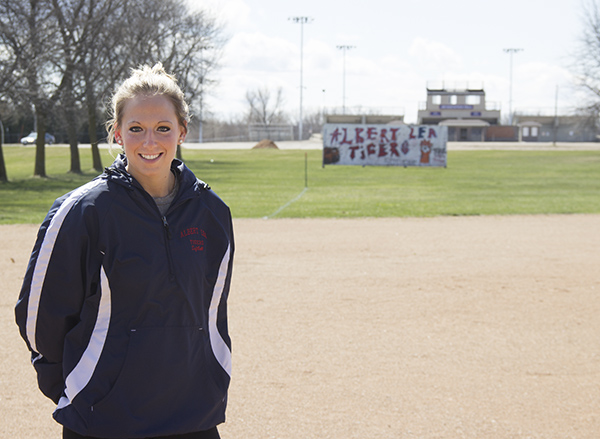 For first-year Albert Lea head softball coach Casey Elsen, she joked that her first big challenge has been the weather.

“We’ve only been outside once; the rain ruined our field a little bit,” Elsen said. “We’ve been in the Rochester dome doing some scrimmage games because nobody has been able to be outside.”

Rainy weather aside, Elsen has spent the past few weeks leading up to the season getting to know the players after taking over for former coach Dan Harms. Elsen said she has been trying her own philosophies in changing the program, which she said has been received positively.

“So far, it’s been awesome,” Elsen said. “It’s our third week in and the girls have really adapted to me so far. They’ve opened up to me so much, they aren’t afraid to come to me about any issues. It’s really nice so far.”

Elsen hails from La Crosse, Wisconsin, where she played softball at Logan High School. From there, Elsen went to Winona State University before transferring to Minnesota State University-Mankato.

When she was in college, Elsen got her first taste of coaching as the B-squad softball coach at Mankato East, one of Albert Lea’s Big Nine Conference opponents.

“It will be interesting going back and going up against them now,” Elsen said.

Communication is a big tenet of Elsen’s game plan. Communication can be the difference between success and failure, which is something Elsen has been stressing heavily.

Focus is another big piece Elsen tries to stress with her players. Without proper focus, mistakes are more likely to happen, she said.

“That’s our big thing is generating offense — getting the bat on the ball, putting it in play,” Elsen said. “Our pitching is a struggle, too. We lost Haley Harms last year and she actually got hurt halfway through the season. They were doing so well and then when she got hurt, they went downhill.”

Defense, however, is one area where Elsen said she has a lot of confidence. She lauded her outfielders and the stops they can create, but stressed that the offense will still have to do its part as well.

“I’m excited to be here,” she said. “I have a couple new coaches on staff and the support overall is amazing. They’re understanding and knowing that I’m going into my first year as a head coach and I’m bringing new things. They’re adjusting to it and they’re even helping me out. So having a phenomenal coaching staff is awesome.”