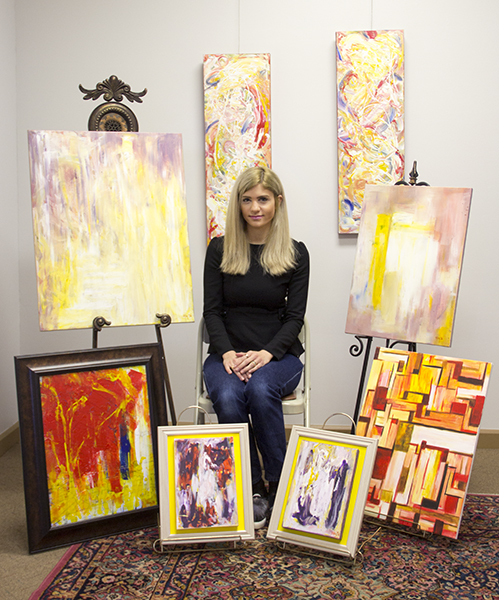 A new exhibit featuring the artwork of May Ya-Ya of Albert Lea will open on Sunday at the Albert Lea Art Center. Sarah Stultz/Albert Lea Tribune

A little more than a year ago, Albert Lea artist May Ya-Ya gave birth to her son, Daniel.

After a few months passed, she said she felt like she was in a phase where she was stuck in life, until one day when her son was about 5 months old, she woke up, put Daniel in his playpen and began to paint.

She had not painted since the baby was born, and it was the first time she painted her feelings without any pre-thought or plan.

Ya-Ya said the art she painted then and has continued to paint in the months since provided a moment of transformation — both in her art and in her life.

“I never used to draw abstract — now all I do is abstract, and I’m loving it,” she said.

This art will be the subject of a new exhibit set to open Sunday at the Albert Lea Art Center called “Re-birth of My Soul.” The exhibit runs through May 21.

She graduated from the American University of Beirut in 2012 with a bachelor’s degree in graphic design. She said she has always had the passion for creating art and chose her field because it merges contemporary art with the demands of a modern, technologically-driven world.

She said her source of motivation is her husband, Fadi Yahya, a doctor at Mayo Clinic Health System in Albert Lea. He challenges her in how he perceives art.

“It is interesting when an artistic mind lives with a physician,” she said. “It allows you to see the other half of the cup.”

Ya-Ya said every piece she creates has meaning to her, as they each illustrate a moment, a mood and an expression — all a part of her journey in life. Her colors represent moods and the brush strokes represent feelings.

The work will be showcased along with poetry from an 18-year-old cousin of her husband, named Bashar Yehya. Ya-Ya is designing a book with Yehya’s poems called “Stuck in Human Form.”

Ya-Ya said she would love to hear what people think about the show by emailing her at maywyaya@gmail.com.

“I like the audience to view and feel with me,” she said.

She has previously had artwork shown at the Color Wheel, the Interchange Wine & Coffee Bistro and during another Art Center event. This will be her first time having her own exhibit.

What: Re-birth of My Soul by May Ya-Ya