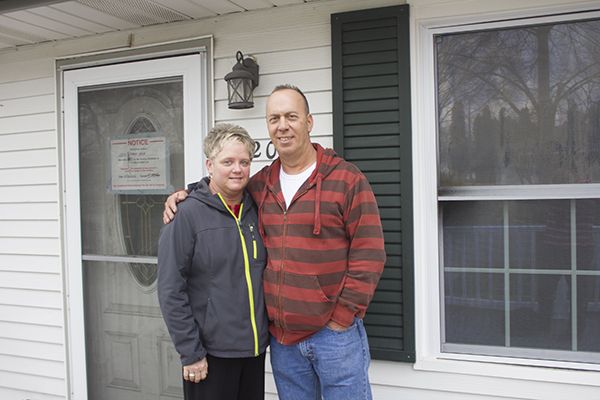 Benefit planned for family who lost home in fire

An Albert Lea family is thankful to be together after a fire destroyed their home in February.

Husband and wife Lowell and Darcy Nielsen and their sons Ty Nielsen and Zach Rice are living in a rental home on Bellevue Lane as they search for a new home following the Feb. 12 fire that claimed their home at 2201 Gene Ave.

A gift card shower will be held for the family from 1:30 to 3:30 p.m. Saturday at Trinity Lutheran Church, 501 S. Washington Ave. Donations will be accepted to assist the family in replacing kitchenware, tools and other everyday items that were lost in the fire.

Darcy Nielsen has been active in the community and was an organizer for the Sawyer Ackland benefit, which was held about two weeks before the fire. Half of the merchandise for the benefit was at the home.

“I’m just very thankful that it didn’t happen before the benefit,” she said.

The family is active with Trinity Lutheran Church. A couple hundred dollars in food collected by Darcy Nielsen for a food drive to feed the hungry this Christmas season, along with supplies that were going to be distributed to schools, were wiped out in the fire.

On the morning of the fire, Ty Nielsen saw smoke, called 911 and his father, Lowell, who was working near the house at Great Lakes Polymer. 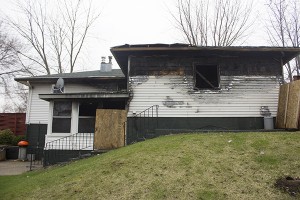 The Nielsen home, 2201 Gene Ave., will have to be bulldozed due to damage sustained in a Feb. 12 fire. – Sam Wilmes/Albert Lea Tribune

Lowell Nielsen then called his wife, Darcy, who was at work at Produce State Bank.

Albert Lea and Glenville firefighters battled the fire that started in an attached garage. In addition to substantial damage in the garage, the main floor of the house sustained heavy smoke and heat damage.

Lowell and Darcy Nielsen were thankful for Ty’s quick thinking, and for each member of their family being safe, including their dog, Emma.

The house is planned for demolition.

Despite the damage, Darcy and Lowell Nielsen were thankful for the dozens of people that helped them clean the area the day after the fire.

“It was just very humbling to have them out there to help us,” Darcy Nielsen said.

The couple also thanked Albert Lea and Glenville firefighters, who battled the blaze in subzero temperatures.

Darcy Nielsen said while she is usually anxious, the last month and a half has taken her stress to a new level.

She said she is relying on something stronger than the situation to help her through.

“My faith has gotten me through as far as I am now,” she said.

The couple said although many of their physical memories from the house have been destroyed, their family is far from finished.

“We’re all together,” Lowell Nielsen said. “Everyone is OK. We can create memories somewhere else, and we will.”

Darcy Nielsen said she expects the family to remain strong, as they did six years ago when she underwent open heart surgery.

“This is just another curveball that we’ve been thrown, and we’ll survive,” she said.