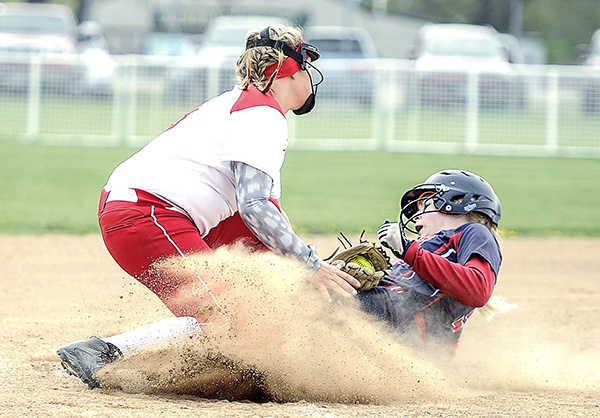 Albert Lea’s Liana Schallock gets in under the tag of Austin’s Brandi Myers during their game Tuesday at Todd Park in Austin. – Eric Johnson/Albert Lea Tribune

While the Tigers came up short, it wasn’t for lack of effort.

“It was a fun game tonight, both agreed upon (by) myself and the Austin head coach,” said Albert Lea coach Casey Elsen. “Our offense didn’t start generating as well as it has been the last couple of days, which is expected after playing our fifth game this week. We had some defensive errors in the beginning that helped Austin get some runs, but we battled back until the seventh inning.”

Allison Grandstrand, Alana Skarstad and Liana Schallock each hit doubles for the Tigers.

“I knew coming into this season that our offense would struggle,” Elsen said. “I’m proud of the girls at how far they’ve come already in the last few weeks and how they’re holding up with this big week hovering over us.”

Senior Hanna Schilling put another strong performance in the circle for Albert Lea under her belt.

“Hanna has been doing an amazing job on the mound — she’s pitched our five games so far and will pitch on Thursday as well vs. (Rochester John Marshall),” Elsen said. “She’s a huge asset to this team and she’s one tough kid; I’m very proud of how far she’s come.”

Despite a busy schedule, Elsen and her team are feeling positive and strong moving forward.

“I will say that this team plays with their heart,” she said. “After our first game to where we are at right now, we keep battling and won’t give up.” 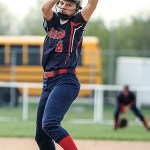 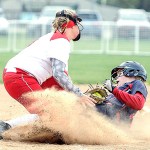 Albert Lea’s Liana Schallock gets in under the tag of Austin’s Brandi Myers during their game Tuesday at Todd Park in Austin. – Eric Johnson/Albert Lea Tribune 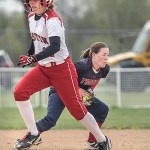