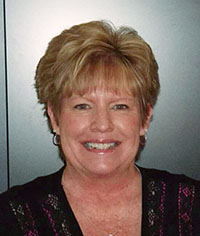 Bernadette was born July 3, 1955, in Denver to Bernard James “Jim” Hynes and Dorothy Mae (Kelly) Hynes. She was the first of eight children — four boys and four girls. Bernadette grew up in Lakewood, Colorado, enjoying a wonderful childhood in a close, loving family. She graduated from Alameda High School in 1973. She was a very proud treasurette (pom-pom girl) for two years and had a select group of high school girlfriends who she stayed close to her whole life. She was a CCD teacher at St. Anthony of Padua Catholic Church throughout her high school years, as well. Bernadette loved Sunset Ranch family vacations, being a Girl Scout and concerts at Red Rocks.

After her high school graduation she attended the University of Colorado, Denver and received a degree in elementary education in 1977. Her first several years of teaching were in the Catholic schools in Denver. Once again, she made close friendships in her early teaching days that she kept for life. Bernadette moved to Albert Lea after meeting Wayne Clark, whom she married in 1984. They were later divorced.

Bernadette loved being a mom. She was the proud mother of three boys. She loved being involved in all their activities, including school functions, soccer games and wrestling matches. Her home was filled with photos of the boys throughout their school years. She was a full-time mother, but also found time to do respite care in her home for families in the Albert Lea area.

A big part of Bernadette’s life was teaching. She was a teacher at United Preschool for 18 years and was a very dedicated, caring teacher to all her students. She loved planning all the programs and events that go along with such a career. She would even work the summer school sessions, knowing she could make a difference in that short time span.

Those who knew Bernadette knew of her great love of Colorado and the Colorado mountains. She was a dedicated Denver Broncos fan and was absolutely thrilled when they won the Super Bowl in February.

The loss of Bernadette is a huge shock to her family and friends. They find comfort in knowing she is with her dad and her beloved aunt, Mary Lou “Mimi” Hynes. She is survived by her mother, Dorothy Mae Hynes; four brothers, Jim Hynes (Marcia), Tom Hynes (Mary), John Hynes (Sheri) and Pat Hynes (Trudy); and three sisters, Theresa Choman (Steve), Michele Oberle (Dave) and Kathleen Daly (Brian). She is also survived by her three sons, Jacob Clark and his wife, Lisa (whom Bernadette loved and considered the daughter she never had), Matthew Clark and Adam Clark. She is survived by the love of her life — her granddaughter, Charlotte Kathryn Clark. Bernadette had 24 nieces and nephews and seven great-nieces and nephews whom she loved dearly. She had friends too numerous to count.