Calif. man sentenced to 3 1/2 yrs. for meth found on interstate

A California man driving a vehicle with more than 30 pounds of methamphetamine on Interstate 35 in Freeborn County last year was sentenced to three years and five months in prison Thursday. 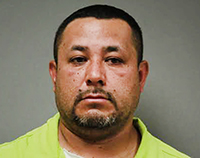 According to court documents, Rodriguez Guerrero was arrested March 19, 2015, after a trooper with the Minnesota State Patrol conducted a traffic stop on Interstate 35.

The trooper noticed a prepaid cellphone, known to be associated with criminal use to avoid law enforcement detection.

The trooper used a wrench to open the compressor and found 33 packages of what later field tested positive as meth. Each of the 33 packages weighed about a pound.

Rodriguez Guerrero was given credit for 406 days served, according to Freeborn County District Court online records.

His sentencing is scheduled for June 30. The charge carries a maximum sentence of 25 years in prison and a $500,000 fine.

Rodriguez Guerrero was originally charged with first-degree meth possession, but that charge was reduced with a plea agreement.