Coaching at the next level 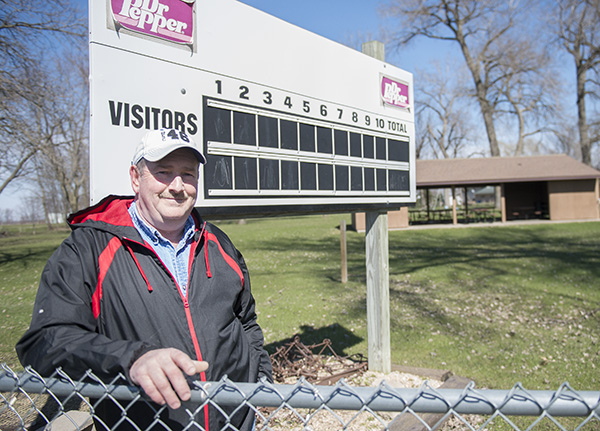 Rich Lackey started this season as the Alden-Conger varsity softball coach after previously coaching in the area for about 16 years. – Colleen Harrison/Albert Lea Tribune

ALDEN — After coaching at the elementary and middle school levels for over a decade, one Alden man is coaching his first varsity team this spring.

Rich Lackey, 51, has taken over as head coach of Alden-Conger’s varsity softball team. Lackey steps up to the plate following Gary Nelson’s 28-year stint as head coach for the Knights. Lackey said he and Nelson have been friends for a long time, and he thinks their coaching styles are similar enough to make the transition fairly seamless.

One area that has taken some adjustment for Lackey, though, has been the difference between middle school and varsity level playing. He described middle school softball as having an “everybody plays” mindset, and said that varsity looks more toward putting a player in an area that suits them best and plays to their strengths.

Prior to taking over following Nelson’s retirement, Lackey has coached softball teams for about 16 years, including age 16 and under summer leagues, as well as teams for players 12 and under and 10 and under, respectively. In coaching the varsity Alden-Conger team, he is assisted by Jolene Bute at first base and is sometimes assisted by middle school coach Sarah Attig.

Originally from Wells, Lackey played baseball growing up and has always been drawn to the field. His favorite thing about baseball and softball is how its lack of control stands out from other sports.

“Nobody can have total control of the ball,” he said. “It’s anybody’s game.”

While Lackey enjoys playing and coaching, he doesn’t consider himself much of a spectator. He’s not a fan of the Twins, or any other major league team.

When it comes to coaching, Lackey’s favorite part of the job is the interaction between him and his players. He leads a squad of nine girls, most of which are fairly young. He has two seventh-graders and one eighth-grader starting for the Knights, and said he has two players out of rotation with injuries. That being said, Lackey’s optimistic about the burgeoning season and said his team has shown drive and perseverance. While Lackey is unfamiliar with some of the teams his players will face, he said his goal is to help his team play each game to the best of its ability, and to keep enjoying the sport.

The Knights (0-2) are scheduled to host United South Central at 5 p.m. today.