Committing to the game 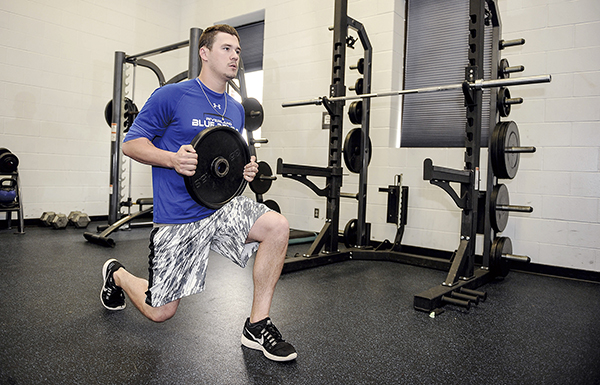 Riverland pitcher Mitch Kelly does lunges in the RCC weight room. Pitchers work more on the lower bodies as that is key for a pitcher’s delivery. – Eric Johnson/Albert Lea Tribune

College baseball players have to step up to stay on top

AUSTIN — The Riverland Community College baseball team has had plenty of success over the past few years and it’s been no coincidence that the team has had players cracking down on its conditioning program in that stretch.

The Blue Devils have won at least 20 games in their last seven seasons and they’ve played in two NJCAA World Series and won five conference titles over that stretch.

RCC head coach Scott Koenigs has been coached the Blue Devils for 13 years and he figured out his training program when he was a graduate assistant baseball coach at the University of Kansas. He did a 100-page research project called “Building a Successful Baseball Program” and he’s followed it at RCC.

Riverland coach Scott Koenigs holds a team meeting before a practice to discuss committment, a major part of getting a team ready. – Eric Johnson/Albert Lea Tribune

The program is so intense that Koenigs said it’s pretty easy to tell the smaller freshman players from the more bulky sophomores on the team.

“We lift with a program that’s designed for baseball players,” Koenigs said. “It’s not meant to add a bunch of bulk. It’s purpose is to strengthen, add muscle tone and increase flexibility. It’s a lot of leg work for our pitchers.”

Koenigs said he was able to condense some of the time in the weight room, based on what some pro teams do.

“After talking with and looking through some info from professional teams, something that I thought was really interesting was the short time needed for the daily lifting routine,” he said. “Stretching is also really important with professional daily workouts.”

The pitchers do a lot of leg lifting to give them strength in their wind-up, but they stay away from heavy upper body lifting. Position players will lift more with their upper body and all players stretch after lifting.

RCC sophomore Zach Schwieters, who was an All-American as a freshman, bulked up about 15 pounds of muscle since coming to RCC and he said that the program is an intense one.

“It’s way different than high school. They gave us guides this year and made it mandatory,” Schwieters said. “You can see a lot of the guys getting bigger and it shows up on the field.”

RCC sophomore pitcher Mitch Kelly was an All-American as a freshman as well and he said the workouts have been helpful for him. Kelly has the accuracy he needs as a pitcher, but getting in the weight room helps him increase his velocity.

“I think it’s a pretty intense workout and we usually have to do it every day,” Kelly said. “I’m trying to do it to get stronger so I can reach that ninety mile per hour club.”

The program that Koenigs gives his players is much more demanding than what most of them experienced in high school. Koenigs demands a big commitment from his team so they can remain competitive and they will have better chances to play for four year schools after RCC.

“It’s a real eye opener when you come here for baseball. We’re year round,” Koenigs said. “There’s captain’s practices, there’s weight lifting and that’s kind of why our program is where it is right now. We put a lot of emphasis on the offseason workout. if they work hard and get after it, there’s a lot of building they can do.”

But the game of baseball isn’t all strength and conditioning. Much of it is getting back on the field and taking the reps.

1. Work on fundamentals. That is the most important thing.

2. Lift smart by lifting for a purpose.

3. Have fun when you are training.

4. Do lots of T-work to try to perfect the swing.